At the age of 78, Alcwyn Deiniol Evans died at his home in Romilly Park Road, Barry.  A former Director of the famous department store Dan Evans, Alcwyn was a familiar face and a very well-known figure in the public life of Barry. 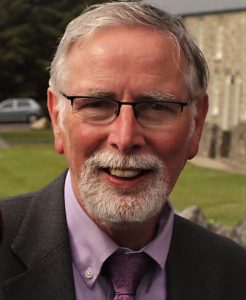 He was the eldest son of Gwynfor Evans, the former President of Plaid Cymru and a native of the town.  During the Carmarthen by-election of July 1966, Alcwyn campaigned enthusiastically for the party.  He worked strenuously to ensure his father’s success when he won the seat to become Plaid Cymru’s first Member of Parliament.  Alcwyn was passionate in his support for the Welsh language and identity, supporting and promoting the same beliefs and values as his father.

He spent over 40 years in business, and the family shop, Dan Evans, was very close to his heart.  Alcwyn was a true gentleman who won the respect and affection of his staff and customers.  He was responsible for a number of departments within the store, and was recognised as a specialist in the toy industry.  He was a regular contributor to television and radio programmes until recently, sharing his knowledge and interest with style, polish and enthusiasm.

Dan Evans closed its doors for the last time in 2006, and as a grandson of its founder, Alcwyn recorded the shop’s history and published a book, Siop Dan Evans Y Barri (Gwasg Carreg Gwalch, 2014), which is an important historical and social portrayal of the business and the town.  More recently Alcwyn worked at the St Fagans National Museum of History, where he enjoyed the further opportunity of sharing his interest, enthusiasm and love of Wales, its customs and its traditions.

He leaves an enormous gap, especially for his wife Rhoswen and son Trystan. Alcwyn will be remembered in Barry and beyond for his wide smile, his sincerity, his humour and his remarkable kindness.