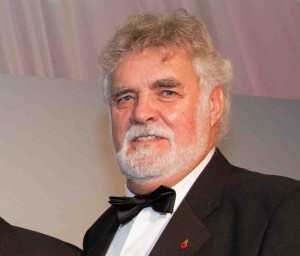 Allan Pritchard, the former Plaid Cymru leader of Caerphilly County Borough Council, described as “a giant of the Valleys”, has passed away after battling against cancer.

Allan, who was 71 and lived in Oakdale, leaves a wife Pauline and two daughters, Kailey and Rhayna, as well as three grandchildren.

Lindsay Whittle, South Wales East AM, said: “Allan served two terms as my deputy when I was leader of Caerphilly council and took over as leader after I was elected to the National Assembly.

“Allan was a giant of the Valleys, a larger than life character who was always committed to doing his best for his community and those across the county borough.

“Alan was a musician, a poet, a first class rugby player, a family man and a Welsh Nationalist. He was the epitome of a Welshman. I will miss my close friend dearly. His life has been cut short far too early.”

Fellow South Wales East AM Jocelyn Davies, who served with Allan Pritchard on the former Islwyn council, said: “Allan’s passion for his home village of Oakdale – which he always referred to as the city on the hill – as well as the community and his country never waned one jot in all that time.

“Allan devoted his life to public service with the support and understanding of his wonderful family. He was a politician of commitment who always stood up to challenges and never shied away from difficult decisions. His retirement was well earned, but sadly all too brief.”

Colin Mann, Leader of the Plaid Cymru group on Caerphilly council, said: “Allan was truly a giant of a man, not only in his stature but also in his personality and his beliefs.

He served his party and his country with honour for many decades.

“Allan battled bravely against cancer and my thoughts at this difficult time are with Pauline, his daughters and the family.”

Leanne Wood, Leader of Plaid Cymru, said: “Allan was an amazing man who gave so much to the Welsh national cause.

“His dedication, belief and ability to inspire and enthuse others was incomparable while his humour and love of life was infectious. He was always personally supportive to me. My thoughts are with his family.”

Allan Pritchard joined Plaid Cymru following the Aberfan Disaster and was first elected as a councillor on the former Islwyn Borough Council in 1979. He left the authority due to work commitments in 1991 but after the formation of Caerphill County Borough Council decided to stand again in 1999 and won back his old Penmaen ward seat.

He started work in 1957 at the age of 15 with the National Coal Board as an underground mining trainee and gradually worked his way through the ranks becoming personnel manager at the Oakdale mining complex and was also awarded British Coal Personnel Manager of the Year.

When the colliery closed, he moved to the Princes Youth Business Trust in 1993 as a regional manager for South Wales and helped more than 300 disadvantaged youngsters set up their own businesses.

In 1996 Allan Pritchard became Director of Development for the Tredegar Development Trust, helping to regenerate the old town. His focus brought new concepts to the area such as cyber cafes and training opportunities for people with learning disabilities.

He was a rugby enthusiast and a former captain of Tredegar, Blackwood, Oakdale and Monmouthshire County (Gwent).

Reflecting on his political career after losing his council seat in 2012, Allan Pritchard listed his achievements as:

Regenerating town centres such as the Blackwood Miners’ refurbishment and new or refurbished libraries and customer first centres at Bargoed, Risca Palace, Blackwood, Abercarn and Caerphilly.