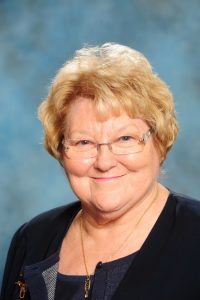 Her Penyrheol ward colleague Lindsay Whittle, who is also the Assembly Member for South Wales East, paid tribute this to Anne.

Lindsay Whittle said: “Anne was a dear friend who worked tirelessly for the community she was proud to represent since 1985.
“She was loved by everyone and Cwm Ifor Primary School, where she was a past chair of governors, is in shock.
“Anne was also chair of Caerphilly Committee of Save The Children and was in the midst of organising a major fundraising concert in what is its 60th anniversary year.”
Anne has been a supporter of the charity since 1969 and took over the chair last year.
Lindsay Whittle added: “I will miss Anne enormously and my thoughts go out to her family at this difficult time. She was a wonderful person.”

Colin Mann, leader of the Plaid group on the council, said: “Anne was a lovely lady who treated everyone as a friend.  She was a very valuable colleague and was respected by all elected members and officers at the council.
“She had given huge service to her community over many years and the respect that she had earned in her community was shown by the fact that she was always re-elected to represent the people of Penyrheol, Trecenydd and Energlyn.
Ann was a strong supporter of Plaid Cymru Credit Union & a loyal member of the Plaid Cymru History Society.

“Anne did a wonderful job representing the county borough in the years that she was Mayor and Deputy Mayor. She will be sorely missed by everyone, by her Plaid Cymru colleagues, by her many friends in the Caerffili and District Twinning Association, both here and in Brittany and by all those in the many organisations she had worked with over the years.”