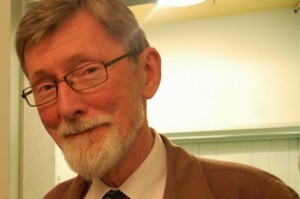 TRIBUTES TO PENARTH DIPLOMAT WHO FORGED LINKS BETWEEN WALES AND LITHUANIA

Tributes have been paid to a long-standing Plaid Cymru member, who was the Honorary Consul for Lithuania in Wales.

Anthony Packer, of Salisbury Avenue, Penarth, died at the age of 74 after battling prostate cancer at the Cardiff and Vale Marie Curie Hospice.  St Joseph’s Church was packed for the funeral mass, and the congregation heard of his many achievements, interspersed with some amusing anecdotes.

A man of many academic achievements, a loving family man and an entertaining raconteur, he had a host of friends and touched many lives.  He was gregarious, happy to engage anyone in conversation and happy to argue that ‘black was blue’ – with a mischievous twinkle in his eye.

One of his major achievements was to build links between Wales and Lithuania, helping to create an international identity for Wales in Europe.  He believed he could advance the cause of Wales by pursuing recognition of Wales, its language, culture and qualities and as a place in which to do business at an international level.  In particular, he sought to develop close links between Wales and the Baltic States, and he was one of the founding members of the Baltic Society in Wales in 1991.

Six weeks before Lithuania’s unilateral declaration of independence, he led a delegation to the country (repeated in 1993) to help the authorities de-Sovietise the country’s education system and other institutions.

Though the country was still under the control of Moscow, he visited the headquarters of Sajudis, the movement for an independent Lithuania, with a message of support from Plaid Cymru.  It was a simple note of democratic regard and support for the movement’s objectives, and was the first such message to come from any British political party.

It was this act of disobedience that led to his initial acquaintance and subsequent friendship with Vytautas Landsbergis, the first President of an independent Lithuania.

During his time as Honorary Consul, he forged strong links between universities in Wales and Lithuania as well as organising the visit of Vytautas Landsbergis, the first post-Soviet President of independent Lithuania, to Wales.

He persuaded Landsbergis to publish his memoirs, helping to translate, edit and publish them.  He was recently presented with the Order of the Diplomatic Star, the highest distinction in the Lithuanian Diplomatic Service, in recognition of his work.

Anthony Packer was born in Caerleon in 1939 and raised in Hengoed. He was educated at grammar schools in Pengam and Barry and studied at the University of Wales College, Cardiff (History), CuddesdonCollege, Oxford (Theology), the London School of Economics (Social Administration) and the University of Liverpool (Psychiatric Social Work).

He began his career in London as a teacher before beginning work as a psychiatric social worker in local hospitals.  He later became the Chief Administrator for the Family Welfare Association and Chief Trainer for child counselling at the world renowned Tavistock Clinic in London.

He taught himself Welsh and helped to advance its use in education and social work throughout Wales.

He was for four years the joint editor of the academic periodical, The Welsh Journal of Education, and for two years the chairman of the Department of Economics and Sociology of the Welsh Guild of Graduates.

Anthony served as the Treasurer of the International Round Table for the Advancement of Counselling (IAC-IRTAC) from 1983 to 1992.  He was also a trustee of the Welsh Centre for International Affairs and the Treasurer and Deputy Chairman of the United Nations Association in Wales.  He also represented the Catholic Archbishop of Cardiff on the steering committee of the UK 3 Faiths Forum.

He was President of the Consular Association for Wales and its Secretary for six years, presiding over its significant expansion and the advancement of its aims towards the active promotion of business and cultural links between Wales and the countries represented by its 29 members.