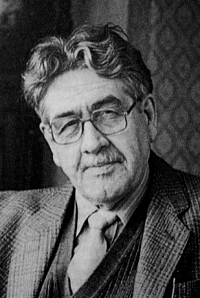 This year marks the centenary of the birth of one of Plaid Cymru’s most eminent Vie-Presidents, Dr Tudur Jones, who held the office from 1957 to 1964. As Vice-President, he provided Gwynfor with active support in public and invaluable advice in private. Living in Bangor, he was also in regular touch with General Secretary, Elwyn Roberts, who was based in the Bangor office. The three, Gwynfor, Tudur and Elwyn, were very much on the same wavelength, representing a nationalism that arose from a deep commitment to the Welsh language and that was firmly based on Christian values. As it happens, all three were Congregationalists. In the nineteen-sixties the Welsh Congregationalist Union resolved to support self-government for Wales, famously declaring that Wales’s problem was that it was too far from God and too near to England!

Tudur Jones, generally referred to as simply ‘Dr Tudur’, stood as Plaid’s parliamentary candidate for Anglesey in the 1959 and 1964 general elections. From 1952 to 1964 he served as editor of Welsh Nation. and edited Y Ddraig Goch between 1964 and 1973. Indeed, he was a very prolific journalist. He had a column in the weekly newspaper, Y Cymro, and it is calculated that these amounted to over one and a half thousand articles. During the nineteen-seventies he gave moral and intellectual support to the campaigns of Cymdeithas Yr Iaith Gymraeg, both privately and publicly.

Dr Tudur was born in Rhos-lan near Cricieth, but was brought up in Rhyl, in the Vale of Clwyd. In 1939 he entered the University College at Bangor, where he was elected President of the Student Union, and gained a first-class degree in Philosophy. In 1945 he registered at Mansfield College, Oxford, to pursue theological studies, leading to the award of the degree of D.Phil. He was ordained a Minister of the Gospel in 1948, and fulfilled that vocation outstandingly as a preacher, scholar and teacher. In 1966 he was appointed Principal of the Bala-Bangor Theological College, Bangor, and on his retirement, was appointed honorary professor at his alma mater. His role as President of the International Congregational Federation from 1981 to 1985 is an indication of his standing at the international level.

In 1974 he set out his thoughts on nationhood and nationalism in the Welsh context in a book entitled, The Desire of Nations. The discussion has three aspects – philosophical, historical and political. The philosophical element seeks to analyse the concept of ‘nation’.

While rejecting those theories which base a people’s claim to nationhood solely on the subjective elements of feeling and willing, Dr Tudur does not disregard these elements as components of nationhood. They may well be necessary components, but alone, they are not sufficient.

Turning to objective criteria of nationhood, he rejects Professor J. R. Jones’s contention (1960) that nationhood amounts to a people’s having their own unique and unrepeatable ‘historical track’. In fact, many collectives which are not nations could just as easily make the same claim. He also rejected J. R.’s later theory (1966) that to be a nation a people need to be organised as a state. Yet, he concedes that there is a political aspect (in the broad sense) to nationhood in as much as a people who take themselves to be nation will be aware of their own internal and exclusive social and cultural structures. Those structures may, or may not, include the institutions of statehood, but, either way, their nationhood will be unaffected.

Similar ideas are reflected in Dr Tudur’s analysis of nationalism. Patriotism is a sentiment: it is a name for love of country. Nationalism is an ideology. It has an objective, rational and public aspect: it links nation and state. Nationalism views the state as an instrument in the service of the nation.  In the modern, global, world nations need the institutions of statehood to flourish, and even to survive.

The nationalism commended in The Desire of Nations has deep roots in Dr Tudur’s Christian faith. It is very alive to the danger of idolizing the nation or the state. This lies behind his reluctance (like Saunders Lewis and the older generation of Plaid activists) to speak in terms of ‘independence’ when speaking of self-government for Wales. It also lies at the root of his bruising encounter with the Adfer movement in the mid-seventies.