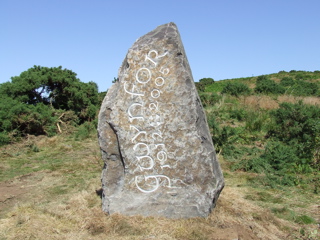 A memorial stone to Gwynfor Evans was unveiled at Garn Goch on Saturday 15 July 2006 as part of the Remember ’66 Rally to celebrate exactly 40 years since he was elected as the first Member of Parliament for Plaid Cymru in an historical by-election on 14 July 1966. Everyone who was at the Square in Carmarthen that night remembers the wonderful jubilation and unreasonable hope that was fired there.
The massive stone, which weighs 7.5 tons, was quarried near Llandybie. Gwynfor’s name was carved on it by the famous artist Ieuan Rees who has been responsible for a number of carvings on memorials to famous people in the history of Wales. He is considered to be one of the most versatile artist/craftsmen in Britain in the field of lettering, carving letters, calligraphy, heraldry a graphic communication.