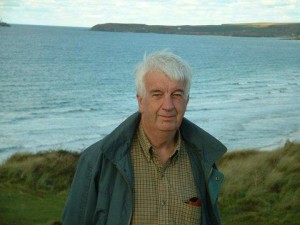 Tributes have been paid to the late Clive Reid, Swansea, who died in November 2014.   A former Plaid Cymru parliamentary candidate for Swansea East and chairman of the Swansea West constituency, his life was honoured at his funeral in orations by the Rev Jill Hayley Harries, Heini Gruffudd and Gruffydd ap Gwent.

Sadly Wales has lost Clive Reid, a well-known chemist as well as a staunch member of Plaid Cymru. Clive was brought up in Barry in a seafaring family but moved to work and live in Swansea. This tribute was delivered in Welsh at his funeral by Heini Gruffudd and translated by Dafydd Williams.

It is a privilege to say a word about Clive, and recall his strength of character as well as his civilised and pleasant demeanour.

Thank the lord for the deacon in Walham Green Welsh chapel in London who advised Clive and Anne that within the space of two years they would settle down to live there for good. What a shame that other Welsh people did not react in the same way as Clive, by moving back to Wales – and ironic that Walham Green chapel closed in 1988. Clive’s response to that advice indicates his dedication to Wales and his determination to live a full life as a Welshman.

Step by step he set about mastering the Welsh language, with great success. He enjoyed his Welsh lessons in school and pursued an O level in the language. On his mother’s side of the family he had Welsh-speaking relations and he became a member of Urdd Gobaith Cymru. Meeting Anne ensured another reason for persisting, and a long time was to elapse before Sara, David and Mari realised the significance of their parents’ decision to raise their family in a Welsh-speaking home. Clive was an embodiment of the way in which the Welsh language can gain ground.

Clive and Anne arrived in Swansea at a time of great excitement in Wales. This was the era of the drowning of Tryweryn, Gwynfor winning Carmarthen, and the foundation of Cymdeithas yr Iaith. Soon Plaid Cymru won seats in Meirionnydd and Caernarfon, and, with others, Clive saw to it that the waves of national renaissance reached Swansea as well.

After settling down in Killay, by now with a young child, he became aware of the evident anti-Welsh nature of political life of Swansea at the time. Clive was not ready to accept the way so many Swansea politicians, especially those in the Labour Party, were so ready to turn their backs on their national heritage, and he became a keen letter writer to the local paper.

He served as chairman of Plaid Cymru in Swansea West for three years and set up a chemist’s shop in Morriston. A small room at the back of the shop became the venue of many meetings that discussed Plaid and the nation, while he was dispensing medicines.

Clive contested a number of local elections in Morriston, defeating Labour in 1976, but not beating the Ratepayers. He also stood twice at Parliamentary level in Swansea East, sadly without any success. At the same time he served as Plaid’s spokesperson on health.

He held strong beliefs. He campaigned against cutting the number of beds in West Glamorgan hospitals, and against an army exhibition in Margam Park, which, in his view, was attracting young people to the armed forces without their recognising the dangers or the moral implications.

Here in Swansea there were campaigns to set up a Welsh-medium secondary school, which followed Clive’s wise counsel to decline going to Sandfields in the shadow of its chemical works.

Before that came the intrusion of the 1969 Investiture, of which Clive was critical. It was not that pantomime that was important to him that year, but the setting up of the Welsh-medium Ysgol Gyfun Ystalyfera. So what would he do, when invited by the residents of Lôn Camlad, to open their street party? Some of them were customers in his shop, and they saw the occasion as a national celebration. So what could be done but turn up to open the party, with me in attendance to take photographs and understand that there was more than one idea of Wales.

He talked about the time that he heard a Labour candidate trying to convince customers in his shop, not knowing he could hear, telling them, “We are not Nationalists, we are Internationalists”. Clive knew that this was a ‘British nationalist’ talking, whose internationalism went no further than London.

And Clive was certain in his backing for the highest standards of internationalism. He took an interest in Europe’s small countries, with Brittany one of his favourite destinations. He held shares in the P&O shipping company, which meant he could take his car and caravan to the continent half price, and he took his family on several trips to Brittany and France in particular. Under his influence I also ventured into the world of stocks and shares, and travelled cheaply with the family to Europe. The channel tunnel and cheap air travel shattered the share values, but Clive and his family carried on with their travels.

After retirement he still continued to make the case for Wales and the Welsh language. He was in correspondence recently in the Chemists’ Society magazine on the topic of Welsh language prescriptions after Morrisons in Bangor refused to accept Welsh prescriptions. In his letter, Clive asked why Welsh was regarded as a problem, although along with many other countries in the world Wales is a bilingual country. And then he reminded his readers that half a century ago the language of prescriptions was Latin.

That was the sort of person Clive was: well informed, conscientious, committed, someone who served his community and Wales with the highest standards.

You, his heirs and descendents, can be proud of him, remembering his ceaseless care for you. We remember him with the deepest respect, thanking him for his contribution, and recalling his late daughter, who was so dear to him, to you and to us. 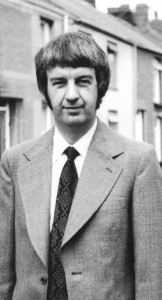 I first met Clive in the early 60s, after I returned from college in Aberystwyth, through the involvement we both had with Plaid Cymru. He had to come to live in Swansea after two years in London, full of enthusiasm for everything that was good about Wales and keen to share and defend what he recognised as our nation’s treasures. This was his dream and he saw Plaid Cymru as the best vehicle to fulfil it.

On the whole politics in Swansea at that time was rather flat, but suddenly everything was changed in July 1966 when Gwynfor Evans won the Carmarthen By-election. Wales was alight and the period that followed, with by-elections in the Rhondda and Caerffili, was remarkably exciting. Everything was possible. Clive was in the thick of things and delighted. Several people remarked that Clive, like Gwynfor, came from Barry and had learnt Welsh. Another boost for our expectations!

From the office in Cardiff came the command that Plaid Cymru had to stand in every parliamentary constituency in Wales in the next General Election. That meant a quite unexpected development for me. One evening I answered the door in Yr Olchfa to discover Dr J. Gwyn Griffiths and Clive on the step. I gave in to their plea to stand as candidate in Swansea West and a new window opened in my life.

Over time Clive’s focus was increasingly drawn to Swansea East and the back room of Reid’s Chemist shop on Morriston Square became a centre for Plaid activity. Clive’s penetrating letters in the Evening Post were a source of inspiration for Plaid members everywhere and his dedication to fight for the people of Swansea East in particular an example to us all. Later on Clive himself stood as parliamentary candidate.

Today we remember and give thanks for Clive the patriot, the campaigner for justice, the chemist and Christian, but above all, Clive the man, the civilised gentleman, the friend and father. To him his family came first – Anne, Sara, David, Mari and the grandchildren. We know that life was not always easy for this family but in both fair and stormy weather Clive’s place was in the bosom of his family.

We are all richer for having known Clive and the world is a better place because of his life.