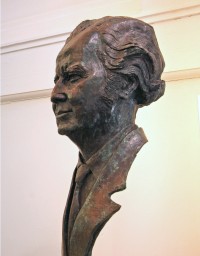 On retiring as deputy headteacher from Ysgol Gymraeg Sant Baruc, Gwenno Hughes decided that it was time to recognise the connection between Gwynfor Evans, past President of Plaid Cymru, and the town, as he was born and raised in Barry attending Gladstone Junior School and the Barry Boys Grammar School. He died aged 92 in 2005 and so under the leadership of Gwenno Huws a fund was raised to pay for a bust of this unique gentleman and the artist John Meirion Morris, Llanuwchllyn near Bala, was commisioned to create the sculpture.

There was a large audience at the Barry Library on 28 February 2010 to see Lord Dafydd Ellis-Thomas unveiling the bronze bust and realising Gwenno Huws’ dream of seeing a worthy memorial to Gwynfor Evans in his home town. The ceremony was presided by Dulyn Griffiths, head teacher of Ysgol Sant Baruc and the school choir performed under the direction of Gwenno Huws and the guest speaker was Professor Gareth Williams from the University of Glamorgan.