Geraint Thomas was a larger than life character who left an indelible impression on all who knew him. A Plaid supporter from a young age, probably his first political victory – as a 12 year old – was ensuring that the scout group of which he was a reluctant member in Queen Elizabeth Grammar School, ditched the union jack in favour of the Ddraig Goch. Of such victories are activists forged! Along with contemporaries Sharon Morgan, Sian Edwards, Dai Rees, Tony Jenkins and others, he was very much part of the enthusiastic groundswell of young Plaid members who contributed so much to Gwynfor’s by-election victory in 1966. 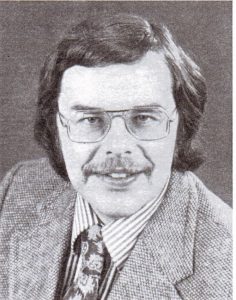 Geraint was blessed with a profound intellect (hence his nickname – ‘Prof’), a sharp wit, and an insatiable interest in the world around him. A voracious reader, he would engage everyone and anyone in lively and well-informed conversation on almost any subject. Following graduation from Jesus College, Oxford he returned to Wales to pursue a career in town planning.

Geraint fought two general elections in Aberafan (1974 & ’79), and later became a long-serving town councillor in his hometown of Carmarthen, contributing much to the well-being of a town he truly loved.

In many ways much of that early political potential remained unrealised, not least due to ill health. But he will be remembered as talented, energetic and able to carry those around him in his enthusiasm and drive; a synergy maker; a positive energy.

Following his recent death at the age of just 68, he has left fond memories and a smile on the face of all who knew him. He leaves a daughter, Ceridwen, and three grandchildren.