At a special meeting in the Cardiff National Eisteddfod on Thursday, 9 August 2018,  Plaid Cymru celebrated the life of the late Professor Phil Williams, the party’s candidate in the Caerffili by-election fifty years ago.

At the meeting, organised by the Plaid Cymru History Society, tributes were paid by Dafydd Williams and Cynog Dafis with a contribution by Dafydd Wigley.

A tribute by Cynog Dafis

I could speak all day about Phil, wondrous polymath as he was, but I have only a brief 15 minutes and I want to concentrate on his very particular contribution to green issues – the most crucial subject – if I may  venture to say, of every subject in the world.

But there is no way I can omit some special memories. 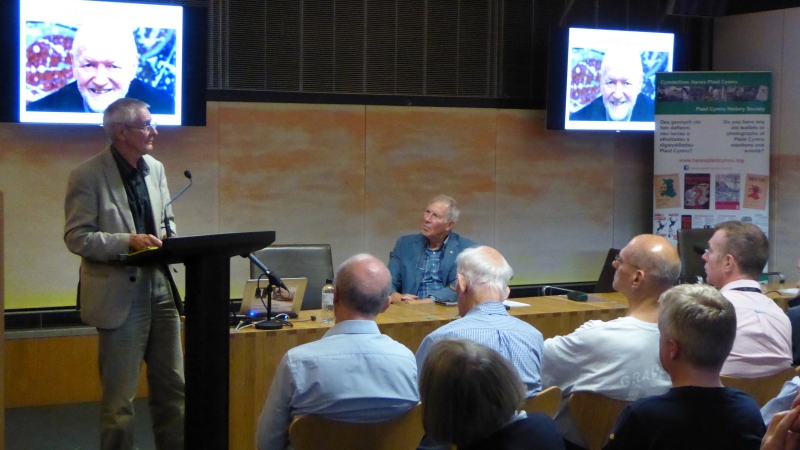 I have a clear recollection of the first time I ever saw him – in the Plaid Summer School in Llangollen in 1961, a pint of beer in his hand, and his face shining as he joined in the singing that resounded through the bar, Welsh singing of course.  We usually think of Phil as a thinker – he said that reading Ted Nevin’s essay on Welsh economic statistics caused him to join Plaid Cymru – but his passion for Wales and its national movement flowed from the heart and guts.  It was that visceral passion that drove his work for Plaid Cymru throughout his life.

My second memory of him is speaking in a meeting of the Plaid National Executive in November 1964 in the wake of a thoroughly disappointing general election, on a motion John Bwlchllan and I proposed that the party should cease, for a while, to contest parliamentary elections.  And that reminds us that in those days Phil was a rebel, a member of the Cilmeri group, along with Emrys Roberts, Ray Smith and others, who sought to modernise the party’s organisation and by the way clip Gwynfor’s wings somewhat in the process.

But let’s move on to green issues, beginning with another disappointing election result, that of the 1989 European election.  Plaid Cymru had held high hopes but in three out of four constituencies, had been pushed into fourth place by the Green Party.  I clearly remember Phil in the count in Swansea, deeply engrossed in a friendly and harmonious conversation with Barbara McPake, the Green candidate.  It is easy to understand the harmony – Phil, as a space scientist had long been convinced of the overwhelming and terrifying  significance of climate change.  I remember him saying, in a meeting of scientists to discuss the latest news about climate change that the feeling was one of cold terror.

Some days before that election, the Wales Green Party had been invited to take part in a discussion session on Sunday morning during the 1989 Plaid Conference in Denbigh (the invitation to attend had been sent before the election).  A working party was set up between the two parties to explore common ground, with Phil leading for Plaid Cymru.  It was to meet regularly over a period of several months.  Two important consequences flowed from this process.

1 Phil drafted a lengthy, detailed and remarkably radical motion on sustainable development to the 1990 Plaid conference in Cardiff.  We can date the greening of Plaid Cymru, which has had a quite far-reaching impact on Welsh politics, more or less from that day.

2 The Plaid National Executive Committee authorised local constituency parties to establish electoral pacts with the Greens where there was local support.  Local agreements were made in the South-east and in Ceredigion, where a striking victory was achieved in 1992, as a result of which I was obliged to undergo an extended period of national service in Westminster.  This was all warmly welcomed by Phil – the readiness to work across party boundaries with people of like mind to bring about valuable gains chimed with his natural instincts.  I remember him telling me as much with approval when we both cooperated in establishing a cross-party group on renewable energy in the National Assembly.

Like Phil, I had been convinced early on of the revolutionary significance of the green agenda and as a result we came to understand each other very well.  It was of course an unequal relationship – he was the guru and I was the disciple who would ask questions and make occasional suggestions.  When I got the opportunity to lead a debate on renewable energy in the House of Commons, Phil’s policy on renewable energy and Wales formed the substance of the speech. 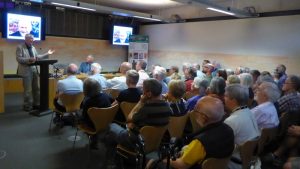 I would like to turn for a minute to a different matter, a very significant one as well.  During the period leading up to the establishment of the National Assembly in 1999 I was Plaid Cymru’s director of policy.  One day a message came from Phil stating that Wales had never received a penny of European money.  Uh? said I.  What about the hundreds of thousands that had come to Wales under the Objective 5b programmes and so on?  But Phil had immersed himself in the Welsh Office accounts and had discovered that every penny of the European funding received by Wales for social, economic and agri-environmental programmes had been clawed back in devious ways by the British Treasury.  This was nothing short of a swindle that was replicated in a number of European countries – the central state using European funds to swell their own treasuries at the expense of the regions that were supposed to benefit, completely undermining the intention of the European Union to increase the economic prosperity of poorer areas.

When Phil became an Assembly Member in 1999 this was a matter of crucial importance, with Wales by now eligible for Objective 1 funding – many millions of pounds.  There was no certainty, to put it mildly, that this European finance would be genuinely additional to the existing Welsh bloc, the National Assembly’s entire funding.  Gordon Brown refused, and Alun Michael could not, guarantee that Objective 1 money would be additional.  The result of this was that (1) the National Assembly deposed Alun Michael in February 2001 and (2) the Westminster Government yielded on the issue in a statement, if I remember correctly in July.  Objective 1 funding would now be additional to the block grant.  The Labour Party claimed the credit.  However, but for Phil, it is safe to say that the Treasury would have carried on with their fraud, at least for a while.  Consider seriously the loss that this would have involved to the Welsh economy under these circumstances.

Phil’s contribution to the work of the first  Assembly, in which he served on the economic development committee, was outstanding.  I remember how he would always prepare his speeches meticulously and rehearse them with care.  He would work all hours of the day and night apart from the occasional solo on the saxophone which would echo down the corridors between 10 and 11.  But I somehow think he experienced an element of disappointment with the lack of direction of the Government under Alun Michael and Rhodri Morgan. In the absence of any strategic direction, sustainable development was interpreted, not as an opportunity for Wales to take the lead in a number of new environmental sectors, but as a series of obstacles to development in the name of conservation and landscape protection.  During those four years, for example, the growth of renewable energy was smothered rather than encouraged.

Despite that, being a member of the first National Assembly, no matter how restricted and unsatisfactory were its powers and internal capacity, was the pinnacle of his political career if not his life – and the fact that he gained this great privilege is a cause of happiness to those who came to know him – another great privilege.

Long may we cherish the memory of the brilliant and beloved Phil Williams.

This is a translation of the address to a meeting of the Plaid Cymru History Society delivered in the Cardiff National Eisteddfod, Thursday 9 August 2018