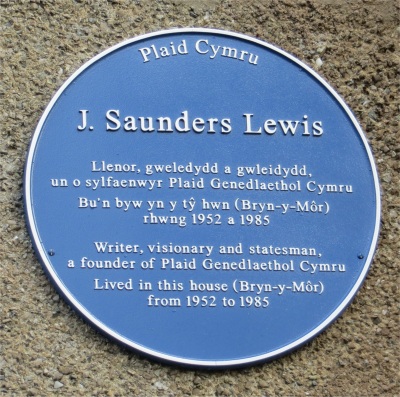 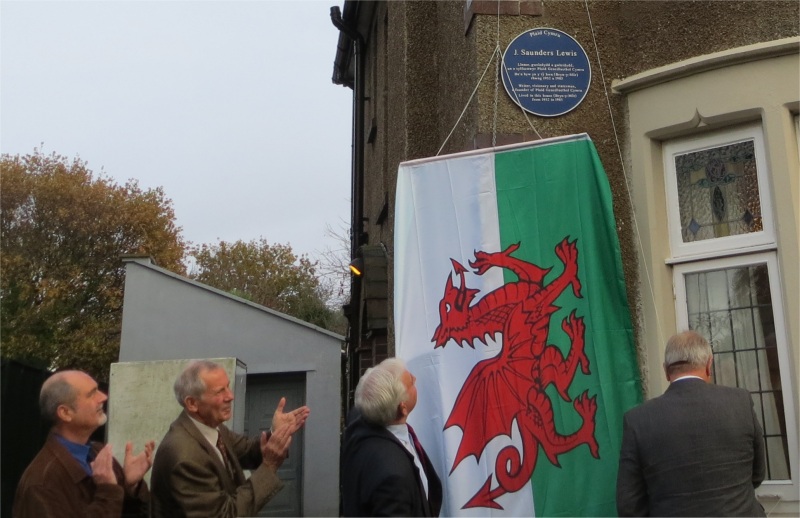 A plaque is being unveiled next week at the house where Saunders Lewis lived in Penarth to mark the 30th anniversary of his death.

The event is being arranged by the local Plaid Cymru branch and the Plaid Cymru History Society, with the support of the current house owner, who has lived there since Mr Lewis died and who has preserved some of the furniture in his old study.

The commemorative blue plaque will be unveiled by Dafydd Wigley at a ceremony at the house in Westbourne Road on Thursday afternoon, November 19.  Lord Wigley, a former MP and Assembly Member who was a bearer at Mr Lewis’ funeral, will also give a lecture on Mr Lewis’ life and legacy in the evening at Evenlode Primary School, Penarth.

Mr Lewis was present at the meeting in Bedwas Place, Penarth, in 1924 which led to the formation of Plaid Cymru the following year.  He was a founder member of the party and its president.  As well as being a political activist, he is generally recognised as one of Wales’ leading literary figures of the 20th century.  He was a dramatist, poet, historian and literary critic.

His 1962 lecture, Tynged yr Iaith (the Fate of the Language), led to the formation of the Welsh Language Society.  He is buried in St Augustine’s Churchyard in Penarth.

Guests at the unveiling ceremony will include Bethan Jenkins, the party’s Assembly spokesperson on Heritage and the Welsh language, Dafydd Trystan Davies, Plaid Assembly candidate for Cardiff South and Penarth and representatives of the Roman Catholic Church.

Everyone is welcome at the evening event, which takes place between 7pm and 9.30pm at Evenlode Primary School, Penarth.  Admission is £10 to include light refreshments. 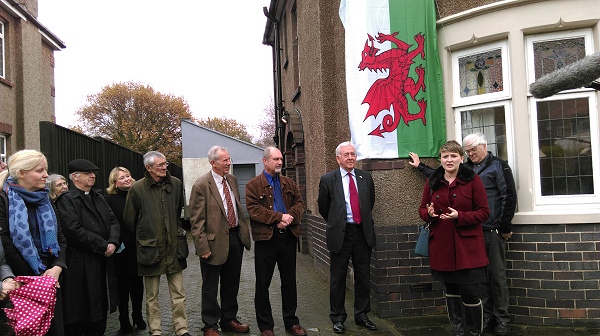 Saunders Lewis’s contribution to the Wales we live in cannot be overestimated and deserves commemoration and celebration.

2015 marks the 30th year of his passing and Penarth’s Plaid Cymru branch and Plaid Cymru History Society are delighted to host a two-part event to remember the man and his memory.

On Thursday 19th November at 2pm, Lord Dafydd Wigley will unveil a commemorative blue plaque which will be mounted on Saunders’ former home on Westbourne Road. The current homeowner has lived there since Saunders died and has preserved much of the furniture in his study. The Penarth branch are very grateful for his support with this event.

There is very limited space at the unveiling so if you wish to attend, please contact Nic Ap Glyn on niclas.apglyn@btinternet.com.

From 7pm – 9:30pm the main event takes place at Evenlode Primary School, Penarth, CF64 3PD. Lord Wigley – former MP and Assembly Member who was a bearer at Saunders Lewis’s funeral – will deliver a fascinating and insightful lecture on his life and legacy.

This promises to be an interesting and entertaining evening not to be missed.

Tickets for the evening event are available on the night at £10 per person and include light refreshments.

Both events will be in Welsh with translation provided.