In this Easter Rising centenary year, Wales has focussed on Frongoch concentration camp. However, there’s a second connection between the two nations. This shines light on how Labour reacted to the Rising, one which fixed the narrative of the Welsh Nationalist Party on both Ireland and Labour for decades. In April 1916, Jack White came on a fortnight’s mission to 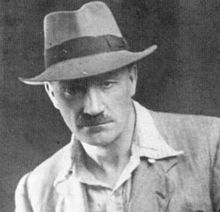 Glamorgan to save James Connolly from execution. He failed; Connolly was shot the morning White was arrested.