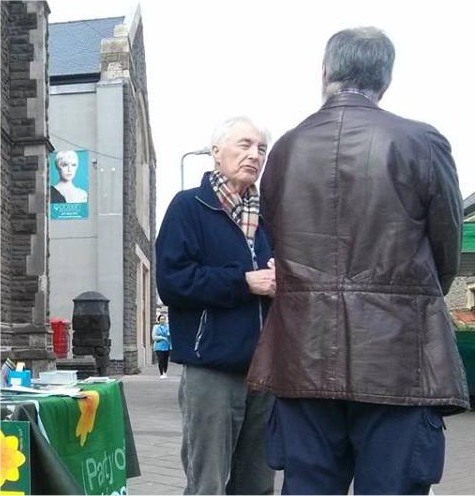 Known to many as John Mac, John McFadyen (born 1941) was a passionate, principled activist who transformed first the Cyncoed/Pentwyn branch then the Cardiff Central constituency of Plaid Cymru.

Born in 1941, he had a burning ambition to go to sea and got a training place at the earliest opportunity on HMS Arethusa in Kent. He went on to the Royal Fleet Auxiliary at 16 years old, and eventually came to Cardiff where he pursued maritime studies and established his own company. He travelled the world as a master mariner, spending time in Iran, South America and Texas in connection with his work, including work on oil rigs.

John met his wife Gwen, from Penrhyndeudraeth, in Cardiff, and became interested in Welsh language and culture. He loved music and was an enthusiastic choral singer, but only became politically active late in life when he joined Plaid. As with all of his interests, he threw himself wholeheartedly into the role of activist and latterly Secretary of the Cardiff Central constituency, turning committee members into canvassers and motivating many with his quick-witted, vigorous but always supportive approach.

John died following a short battle with cancer on 29 June 2015. He will be remembered as an inspiring campaigner as well as a dedicated family man.