We were sad to hear of the recent death of one of Plaid Cymru’s leading members in the Gwent valleys, Glanmor Bowen-Knight, Tredegar.  The Plaid Cymru History Society extends its deepest sympathy to his sister Rae and the family.  A tribute to Glanmor by his friend Hywel Davies may be read here.

The passing of Plaid Cymru activist and former councillor Glanmor Bowen-Knight of Tredegar was fittingly observed at Llwydcoed Crematorium on Wednesday, 9 October, 2019 in a humanist service attended by a large gathering of family and friends. 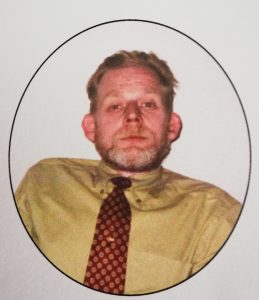 Though physically challenged from early childhood, and obliged to walk with the aid of sticks, Glanmor was proud to proclaim that in better circumstances he would have been ‘a 6-footer’. Politically, his life of huge dedication to the national movement of Wales confirmed his claim.

A member of Plaid Cymru since the 1960s, Glanmor served in various capacities as an officer of the Tredegar Branch and Ebbw Vale / Blaenau Gwent Constituency committee. He was also a Plaid member of Tredegar Town Council for many years until shortly before his final ill health. By profession, Glanmor was an horologist, having been trained as a young man at St Loye’s college in Exeter. He was well known in Tredegar as the watchmaker and jeweller fastidiously at work for several decades in his corner of the Gus Jones Jewellers shop.

As in his work, so too in politics, Glan used his precise and well organised brain to great effect in helping to build an effective Plaid Cymru party machine in the unpromising birthplace of Nye Bevan.  He delighted in seeing the fruits of his labour, along with that of others, through the emergence from Tredegar of Plaid AM Steffan Lewis – though lost so tragically young – and the near-victory of Plaid in the 2016 National Assembly election in Blaenau Gwent constituency.

Very justifiably, Glanmor was a recipient of a Plaid Cymru Special Contribution Award.

He leaves a sister, Rae, and her husband Charles, and a wide extended family, all of whom were so proud of him and so devoted to his care.