The former leader of the Scottish National Party Gordon Wilson died recently, aged 79. Gordon was a great friend of Wales. Plaid Cymru extends its sympathy to his widow Edith and the family, and to our friends in Scotland and beyond who will mourn his passing. His friend and former fellow MP Dafydd Wigley has made this special tribute. 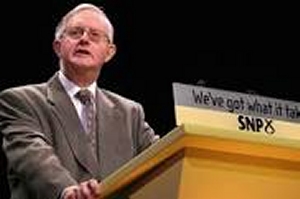 Gordon was a great friend of Wales and a totally committed nationalist. We had met in the 1965 Plaid Cymru summer school in Machynlleth when he was National Secretary of the SNP, and he visited Wales on many occasions. We were both elected to Westminster in February 1974 and were colleagues during the fraught days of the 1978 Devolution Acts and the 1979 Referenda when the iniquitous 40% rule prevented Scotland from getting their National Assembly, although a majority of those voting in Scotland had supported it. In the following election, after the downfall of the Callaghan government, the SNP lost 9 of their 11 seats – with just Gordon and Donald Stewart surviving, as colleagues for Dafydd Elis Thomas and myself. We continued to argue the case for our two nations, until Gordon lost his Dundee seat in 1987. By then Margaret Ewing and Andrew Welsh had regained their seats, and they were joined by Alex Salmond, leading to the campaign that eventually, in 1997, secured our respective parliaments. Gordon was a key person, at a critical time, in the emergence of the SNP as a major parliamentary party. Modern-day Scotland owes him a debt of gratitude and we in Wales salute his memory.