LOSS OF A GIANT LOSS FROM THE CWM

His friends and residents of the area were shocked to hear about the death of the former councillor Howard Davies, Alun Lewis Court, on Monday afternoon, September 12, at Merthyr Hospital. He was 66 years old. 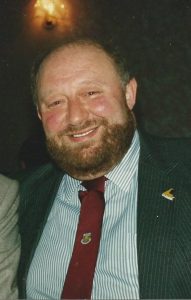 Howard belonged to one of the best known families of Cwmaman and beyond. His great grandfather was the poet Isaac Edmunds (Alaw Sylen), Abercwm-boi, whose poems appeared for years in the Welsh papers of the area (Y Gwladgarwr and Darian). The poet’s daughter, and Howard’s grandmother Howard  was one of the most famous artists in Cwm Cynon and Cwmaman: a woman known by everyone (as was the fashion of the age) as ‘Madam Elizabeth Edmunds Price’.

Naturally, Howard was proud of these relationships and his middle name, Edmund, he received from his parents Trevor and Nancy Davies. His other grandfather (Thomas Dafis ‘Drapwr’ to the old inhabitants) was a miner and a deacon at Zion.
Howard loved Cwmaman and its people. He featured prominently in the life of the area all his life. Raised in Byron Street and Milton Street and – as much – in Seion Chapel where he was  one of the ‘chicks’ of Idwal Rees and the saints of that worthy cause. Inevitably, therefore, after Aberdare Welsh School was established in 1949, Howard went there from 1955 to mature as a natural Welshman of blood and desire until the end.
After he attended the Boys’ Grammar School, Aberdare (before Rhydfelen and similar schools), he went to Cyn-coed. But a teaching career did not appeal and he left to join the  Tax Revenue in Llanishen. There he remained until he retired about six years ago.

He served as a councillor for Plaid Cymru in Aberaman South ward between 1991-95 and  again between 2008 and 2012. In the early ’90s, he was appointed governor and later chairman of Glynhafod Primary School governors.
Howard’s health deteriorated greatly during the past five years and  traveling back and forth to the hospital was an integral part of his life. He had a wealth of support from his friends –  Philip and Beryl Northey, Alan Hoare, Gwyneth Edwards and others who gave unfailing loyalty over a long period.
Howard’s funeral was held on Friday morning 23 September at Llwydcoed Crematorium,  with a large congregation paying their respect.
DLD.