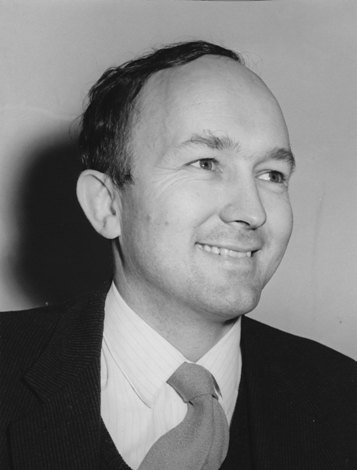 John was born of Welsh parentage in 1928 in Lahore during the time of the British Raj. ,and raised far from Wales His early years were spent mainly in India, where he went to school , followed by his later education at Bristol University studying Mechanical Engineering . He was among those who contributed to the electoral progress of Plaid Cymru during the late 1950s and 1960s. He stood twice as a parliamentary candidate in Caerphilly in 1959 and 1966. These years have been described as a real turning point for Plaid Cymru.

John was no armchair politician. He had a charismatic personality and a mischievous sense of humour. He was an eloquent public speaker, and stood in the village square of many a mining community sometimes, speaking to an audience of an old man and a dog, and sometimes just a dog. His charisma attracted many young people to the nationalist cause. On one occasion,
John raised his loud hailer, speaking in an empty square about the benefits of self-government for Wales. Standing out of sight in a nearby house was a young academic, Phil Williams, who having heard him speak, made up his mind to join Plaid Cymru, despite being a member of the Labour Party at that . time

“Out of the blue –here was a Nationalist candidate who shattered my prejudices. John Howell was brought up in Pakistan, didn’t speak Welsh, and had worked in the aerospace industry in California “(Phil Williams, ” Voice from the Valleys” 1959-1975)

Phil Williams was not the only convert to be influenced by John’s personality, eloquence and conviction. On another occasion, accompanied by his agent, Alf Williams, John was out canvassing, speaking with a loud hailer in Pontlottyn. A young man, who had just returned home from work, was sitting eating his supper in a back kitchen, listening carefully. As a result, sometime later Dave Walters was himself out canvassing with Phil Williams in the 1964 election, experiencing much the same conditions —using a loud speaker in an empty terrace, no one in sight, and not an open door.

“Don’t worry, Phil, there’s a chap having his supper. He’s listening carefully and tomorrow he’ll be down at your house, wanting to join “(Voice from the Valleys)

John was versatile in his approach to electioneering —out canvassing with Owen John Thomas, approaching a Pakistani corner shop; John introduced himself in Urdu, his first language. Taken by surprise, the shopkeeper asked John, ” But what country do you come from?” Pakistan “, replied John. “Yes, yes, but what is your nationality? “I’m a Pakistani just like you”. Answered John, much to the amusement of the shopkeeper.

Given his upbringing and education in a school in Lahore founded to educate the future rulers of the Raj, his dedication to the Nationalist cause was all the more remarkable. Influences in his early life in India, where he witnessed the rise of the Indian Nationalist movement led by Gandhi; and later in Canada, where he worked as an aeronautical engineer, and saw the renewal of French nationalism in Quebec, no doubt played their part in developing his political consciousness.

His withdrawal from active engagement with Plaid Cymru was forced upon him by the onset of Multiple Sclerosis, but he continued to take a keen interest in the political life of Wales,
and remained a staunch supporter of Plaid Cymru all his life.