Councillor with iron in her soul 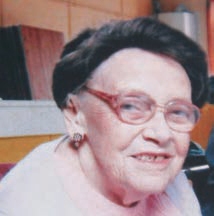 A devoted Plaid member for many years, she was a member of Merthyr Tydfil County Borough Council when the party was the ruling group under the leadership of Emrys Roberts.

For many years she served on the National Executive Council and was the Merthyr Branch Treasurer. She was also Honorary Branch President.

Paying tribute on behalf of the Merthyr and Rhymni Branch, Brian Thomas said: “I, like many other members, first got to know Marian in the 1970s when Plaid took off as a political force in the town. With other members, such as Emrys, Dafydd Wigley, Gareth and Linda Foster, Gwyn Griffiths (recently sadly deceased), my brother Geoff, she broke the stranglehold of the Labour Party in the council elections in the famous victory of 1979.

“Marian was a dear friend to all, and the Branch held regular meetings in her front room with plenty of cups of tea and coffee with biscuits.

“She worked tirelessly for her local church the Quar Church, a short distance from her home, and was a long-standing member of CND Cymru.

“We should all be truly thankful to Marian for her friendship and generosity and her love of Wales and the language.”

Emrys Roberts writes: “Margaret and I have very fond memories of Marian from our time in Merthyr Tydfil in the 1970s.

“She was a very quiet and unassuming woman with a great love of her country. Marian never looked for the spotlight or for any praise. She looked for work instead and she worked hard, with conviction and persistence, to help build a better Wales. She often reminded me of the fable about the tortoise whose persistence enabled him to reach the finishing post before the hare.

“When Margaret and I came to Merthyr Tydfil, everyone (apart from some Labour councillors, perhaps!) was very welcoming and friendly and promised all sorts of assistance. Plaid received a great deal of support from many people. But, unfortunately, many people fail to keep their promises. Marian was not like that. If she gave you her word, she would keep her word and she usually achieved far more than she had promised.

“Although quiet by nature, Marian had iron in her soul. She was loyal, active and persistent in her endeavours for Plaid and for Wales.