A special session will take place in next month’s Plaid Cymru annual conference to honour the memory of the late Dr Wynne Samuel.

Born in Ystalyfera in the Swansea Valley, Wynne Samuel helped lay the foundations of Plaid Cymru in the South Wales valleys and became one of the party’s first ever councillors when he won a seat on Pontardawe Rural District Council in 1946. 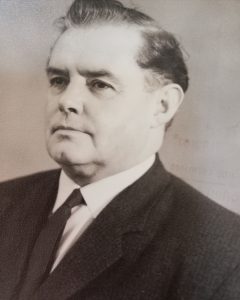 Dr Wynne Samuel in 1965, at the time of his appointment as chief officer of Tenby Borough Council

He went on to become a barrister and a leading expert on local government, and at one time was considered alongside Gwynfor Evans as a potential leader of Plaid Cymru.  In 1965, he was appointed as Town Clerk – or chief executive – of Tenby Borough Council in Pembrokeshire, and later on he became secretary and driving force behind the Association of Welsh Community and Town Councils.

Wynne Samuel’s service will be commemorated in an illustrated lecture organised by the Plaid Cymru History Society and delivered by the society chairman Dr Dafydd Williams.

” Wynne Samuel was one of the towering figures of 20th century Plaid Cymru”, said Dr Williams, who served as the party’s general secretary between 1971 and 1993.  “It is high time his outstanding service to Wales and our local communities was accorded proper recognition”.

The lecture takes place at 4:30pm, Friday 5 October 2018 during the party’s annual conference at Theatr Mwldan, Cardigan.  It will be delivered in Welsh with simultaneous translation into English.