Rhys Lewis (1937-2020) was a mainstay of Plaid Cymru in Cardiff Central for very many years. Ever present in party meetings, his commitment, his wisdom and his many organisational skills were a constant source of inspiration to all members.

Born in Machynlleth, he was just 1 year old when his family settled in Cardiff, and he was undoubtedly a proud Cardiffian.  Although Welsh had been his parents’ language, that had been largely abandoned in the home when they settled in the city, and Rhys attributed his mastery of the Welsh language to his inspirational teacher in Cathays. 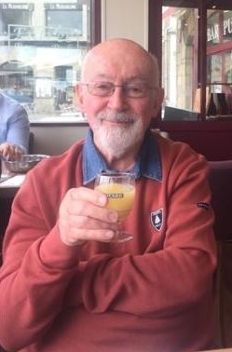 A successful career in journalism within BBC Wales and independent broadcasting companies enabled him to keep abreast of Welsh current affairs even if those roles limited the ways in which he could contribute to party political work,  but he more than made up for that when, following retirement, he grasped the opportunity to work full time alongside his lifelong friend and collaborator, Owen John Thomas throughout the first two National Assembly terms (1999 – 2007). As a keen gardener he was used to nurturing plants and at a time when the fledging legislature was far from accepted in many quarters, Rhys worked tirelessly to show the relevance of the Assembly to the people of Cardiff.  He was a caring individual and helped many a Plaid member and their families during difficult periods.

Rhys was a confirmed Francophile. He loved the times he spent in France and never missed an opportunity to use his French. He was a firm believer in Wales as a European nation, and the result of the European referendum was something that troubled him greatly.

Recent ill-health had left him with limited mobility, inhibiting his ability to canvass and leaflet, but he still found alternative ways to contribute to Plaid Cymru campaigns – organising, contacting supporters, and sharing his political insights and his humour.

It was while he was in hospital for an unrelated condition that he contracted Covid-19 and died on April 12th.  We extend our sympathy to his wife Sue, his children Geraint, Menna and Non and his grandchildren Gwen, Sophie, Alice, Nel and Cesia. Rhys enjoyed good wine and I’m sure many of us will raise a glass in memory of a true gentleman and Welsh patriot.