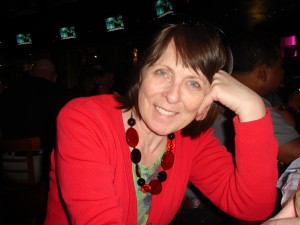 The long-standing Plaid Cymru member and artist, Eirian Llwyd, 63, died in Ysbyty Gwynedd following a short illness in January  2014.  Eirian was the wife of the former Plaid Cymru leader and former AM and MP for Ynys Môn, Ieuan Wyn Jones.  She was also the loving mother of three children, Gerallt, Gwenllian and Owain and grandmother to six grandchildren. A statement from the family. Eirian’s contribution has been invaluable – she gave a lifetime of love to her friends and family, a lifetime of service to her nation and to humanity, and more recently she worked with great passion in the field of the arts. She qualified as a nurse in Liverpool in 1969-73 and then worked as a midwife at St Asaph Hospital. Born at Prion, near Denbigh, she passionately loved her native area. Wherever she spent time, she regularly returned to Tanywaen, the family farm, from which she derived inspiration and strength. Her brother John and her sister Bethan meant so much to her. She married Ieuan in 1974 – over forty years of love and firm friendship. Eirian gave him every support during his political career as Member of Parliament, Assembly Member, Leader of Plaid Cymru and as Deputy First Minister in the One Wales Government. Without her continued sterling support, he could never have achieved so much. She worked to promote women’s position in politics, and was responsible for amendments to Plaid’s constitution in the 1980s and for securing women a more prominent place on Plaid’s major committees. She battled prejudice within her own party and beyond, and did everything in her power to secure fairness and equality for women in the ranks of political parties. Eirian was responsible for establishing the Rhyl branch of Women’s Aid in the 1970s and 1980s. She persuaded Clwyd County Council and the Borough Council to fund a women’s refuge in the town, and helped to secure a temporary home for women and children who were victims of domestic violence. She campaigned vigorously to change attitudes within local agencies, such as social services departments, the health service and the police. This was in a period when many agencies were reluctant to admit the need for intervention in cases of domestic violence. After moving to Ynys Môn, she qualified as a health visitor and worked in that field until the late 1990s. She was highly respected, and prominent in her concern for children and families in need, for whom she battled to win a fair deal. She wrote a thesis on accidents to children in the home, and organised a seminar on the subject, bringing all agencies together. A number of the recommendations were implemented, including that of making children’s play areas safer. In 2001, she changed direction, and graduated in art at Cardiff Institute. She specialised in the field of print, and her work was regularly exhibited in Wales and further afield. She created work in several print media, and her work was very often based on the natural world, ancient monuments and the churches of Ynys Môn, using such media as linocuts, etchings and lithograph. With two friends, she established The Original Print Place, to bring the original prints of a number of prominent Welsh artists to the attention of a wider audience. She felt passionately that original prints needed to be better appreciated and understood, and to be seen as an affordable means of purchasing the original works of some of the nation’s best artists. She launched the enterprise by having a stand at the National Eisteddfod’s Exhibition Hall, and the work has now been exhibited at several Welsh galleries, including Ucheldre at Holyhead, Plas Glyn y Weddw at Llanbedrog, Wrexham and Cardiff. Recently, the work of Welsh printmakers was taken to Brussels and Amsterdam. Eirian convened meetings of printmakers across Wales and sought to persuade them to establish a Print Council in Wales. She saw this as a means of providing an even better platform for artists. In many respects, Eirian was a pioneer, a principled campaigner with a clear vision of what needed to be done, in whichever area she worked. To many of her contemporaries and colleagues, she was an inspiration. As an outstanding mother to her three children, Gerallt, Gwenllian and Owain, Eirian has rejoiced in their success, and was a grandmother of six – Elin and Tomos, Annest and Rhodri, Morgan and Megan. Her care for them has been constant, and she has shared with them her love for art and for nature. Eirian was a passionate nationalist, and has campaigned for the Welsh language with Cymdeithas yr Iaith, taking part in a number of protests in the 1960s and 1970s. Within Plaid, she worked closely with Ieuan, and he depended heavily on her for support, advice and campaigning work. Eirian’s faith was unshakeable, and during her illness, she displayed extraordinary resilience, facing all that came her way with grace and dignity. We came to know her better, and her family and close friends were privileged to be in her company. We are better people because of her.