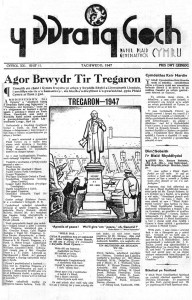 Because the War Office was considering a takeover of 27,000 acres of agricultural land in the Tregaron area to provide a training camp for the Royal Engineers. This followed similar actions in Penyberth, Epynt, the Preseli mountains etc.  Later on, enlargement of the military camp at Bronaber near Trawsfynydd was also considered. Plaid Cymru led the opposition to all these in turn.

The campaign to save Tregaron in particular was fought between the autumn of 1947 and the summer of 1948.  The date of the protest seen in these two cuttings was Thursday, 16 October 1947.

The protest seen in the two images (‘the procession of flags’) took place in Park Place, Cardiff on Thursday, 16 October 1947.  On that day, the War Office was staging a conference with other government ministries to discuss the plans.  Dozens of telegrams were presented from all parts of Wales opposing the proposal to the Town and Country Planning official in Park Place that morning.

Plaid Cymru led the campaign in Tregaron, in cooperation with local farmers and Undeb Cymru Fydd.  The protest in Cardiff was specifically organised by Plaid Cymru, with 20 party members taking part.  In the second picture, the procession is led by Nans Jones who worked in Plaid’s office in Cardiff.  She can be seen in the first picture too, standing second on the right next to the General Secretary J. E. Jones, (who is standing on the pavement).

WHAT was the result?

Some battles were won, others lost.  This was among those that were won, and the War Office gave up its plans to take over land in Tregaron by the summer of 1948.