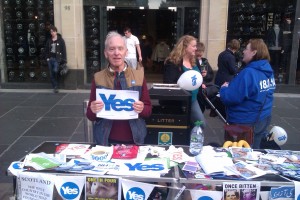 Landing at Glasgow I wondered what was in store for Owen & Sian and myself. Glasgow being almost solid Labour land, what hope could there be for a ‘Yes’ vote?

We were quickly into the fray. Canvassing, leafleting houses and streets, singing and chanting with flash mobs – plus knocking up and polling booth duty. A particular memory was canvassing in a deprived area where voter after vote said ‘Yes’.

The ‘Yes’ Campaign was marvellous, well-organised, hard working – and even feeding us.

Late night St. Georges Square was inspirational with flags, bands, speeches and cheering. Even the shouting of a group of Loyalists waving Union flags only added to our good mood.

The result in Glasgow was for us – and another Referendum is inevitable. But when? Aided by the antics of Cameron and the other Unionist parties, before long.