The 100th anniversary of the birth of the celebrated nationalist poet Harri Webb has been marked with the laying of flowers at his grave at St Mary’s Church, Pennard, Gower (12 noon Monday 7 September 2020). 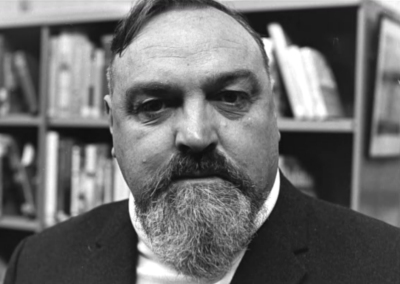 Harri Webb was born in Swansea at 45 Tycoch Road and grew up in Catherine Street near the centre of the city.  His family had strong links with the Gower peninsula.

He became a leading figure in Plaid Cymru, editing the party’s newspaper Welsh Nation and standing as its candidate at Pontypool in the general election of 1970.

Harri Webb came to prominence as a poet during the 1960s, when political nationalism was beginning to make headway in the industrial valleys of South Wales, and became a regular contributor to the magazine Poetry Wales.

The gathering at Pennard was told by Emeritus Professor Prys Morgan that Harri Webb had succeeded in achieving great popularity as a poet.

“His work was mainly through the medium of the English language, but no-one was a more warm-hearted Welshman than Harri Webb”.

Flowers were laid at the grave by Guto Ap Gwent, Kittle. 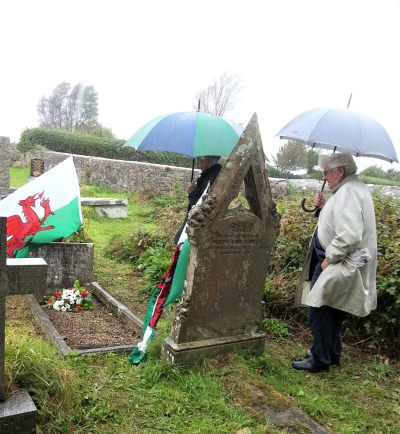 Guto Ap Gwent and Professor Prys Morgan at the grave of Harri Webb
after the ceremony in St Mary’s Church, Pennard

The ceremony was promoted by the Plaid Cymru History Society and Swansea and Gower Plaid Cymru with the kind cooperation of the Rev Peter Brooks, Vicar of the Parish of Three Cliffs, and conducted in adherence with current social distancing regulations.

Full details of the life of Harri Webb may be found at: