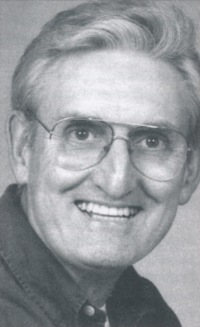 Dafydd Huws, who died aged 75 during 2011, was a leading member of Plaid Cymru who helped hold the party together at a crucial phase in its history.

He combined three careers – as a psychiatrist, farmer and politician – bringing to each of them a capacity for innovation and for speaking his mind.  Later in life he turned to the promotion of renewable energy as a way of bring new life to rural communities in West Wales.

I first met him in 1964, as a new member of Côr Aelwyd Caerdydd, the Urdd  youth choir led by Alun Guy.  Dafydd was a star member of the tenor section, whose musical ability made him exempt from regular choir practice.  You couldn’t miss his mischievous sense of humour and his store of jokes. Dafydd was the first I heard to perform “I’m Kerdiff born and Kerdiff bred” – although he was actually born in Kenya.

He worked as a leading psychiatrist, who became Clinical Director of South Glamorgan psychiatry service.  This was a truly high pressure job, with responsibilities ranging from the treatment of the severely disturbed to preparation of evidence for court cases.  Later on, I would see him in his work environment at Tegfan in Cardiff’s Whitchurch Hospital, when I called during his lunchtime break to prepare for Plaid Cymru executive meetings.  There I saw for myself the way he engaged with  professionals and patients alike with never failing ease and humour.

Dafydd’s natural gift for communication meant he was soon in demand by the media, making frequent appearances on radio and television on medical issues and current affairs in both Welsh and English.  His love of Wales, its landscape, language and culture was boundless, and later in life he mastered the intricacies of Welsh metrical poetry, becoming an accomplished practitioner in the art of cynghanedd.

His second career, in agriculture, provided a welcome relief from the strains of medical life.  Soon after I got to know him, he took the major gamble of acquiring part ownership of Mynydd Gorddu, an upland farm in the Pontgoch area near Aberystwyth, close to his childhood home.  Dafydd’s commitment reflected his deep attachment to the life of rural Wales rather than a commercial investment, although he proved adept at running a business as well as being a caring employer.

But most people will remember him for his involvement with politics as a lifelong member of Plaid Cymru.  In the heady days that followed the 1966 Carmarthen byelection, Dafydd took on the task of contesting the Plasmawr ward, an area that included Fairwater and part of Ely in Cardiff West.  And in 1969 his charisma and enthusiasm carried the day, winning Plaid Cymru’s first ever seat on Cardiff City Council with a razzmatazz campaign that included motorcades and yellow dayglo posters galore.

He was to contest Cardiff West against George Thomas, later Viscount Tonypandy, fighting the 1970 and the two 1974 general elections.  By the late 1970s, his services as an inspirational candidate were required in the more winnable seat of Ceredigion, his home county.   Dafydd was far from keen.  Apart from the heavy demands of being a frontline candidate, there was always the dread possibility of winning!  Life as an MP in Westminster held no appeal for him, and he frequently told me how he admired the ‘two Dafydds’ (Wigley and Elis Thomas) who showed every sign of relishing their job in the House of Commons.  What swung the balance was a letter from Gwynfor Evans, concluding with the words, ‘Dafydd, derbyniwch hyn fel eich tynged’ –  accept this as your destiny, or fate!.

In the same way, he accepted the role of Chairman of Plaid Cymru in the wake of the failed 1979 referendum and the loss of Gwynfor Evans’ seat at Carmarthen.  This is never an easy job (and it was and is of course unpaid).  In the circumstances of the 1980s, at a time of considerable infighting over the direction of the party, it was a veritable bed of nails.  Dafydd saw it as his role to steady the ship; accepting that the frequent attacks he had to endure went with the territory.  Plaid Cymru owes him a huge debt of gratitude for holding the party together and preparing for successful 1997 referendum and later Assembly election advance.

Perhaps that experience was good training for the new role of pioneering renewable energy.  Dafydd was an innovator by instinct: and he saw that the imperative of developing wind energy could help provide rural communities with a much needed economic input – providing that control was in the hands of local people.  He succeeded in developing a wind farm at Mynydd Gorddu in the face of opposition, mainly from incomers to the area.  That involved a running battle over the red tape surrounding supply of power through the National Grid, which made local control well nigh impossible.

A more ambitious project near Tregaron, Camddwr, was held up by similar bureaucratic issues – this time the interpretation of how Ministry of Defence low flying restrictions impacted on wind farm development.  Dafydd was not prepared to accept the civil service view; so he travelled all the way to Aberdeen to attend an energy policy convention to lobby a senior MoD official who just happened to be a former student at Aberystwyth.  As suspected, the strict interpretation turned out to be misplaced; and the project may well proceed, although too late for Dafydd to witness its fruition.  And it was during this mission to Aberdeen that he noticed the first signs of the cancer that he fought so bravely for the next seven years.

Whatever the challenges that confronted him in his professional and political life, there is no doubting the enormous happiness he found in his family.  Meeting Rhian brought to an end his career as one of Wales’ most eligible bachelors but it opened up his life as a husband and father of three daughters and two sons, who were a source of great happiness and fulfilment.

To his family and friends, Dafydd will remain the source of many fond memories: to all of us, his life is an inspiration to make Wales the free, self-respecting nation that he sought for future generations.