S.O. Davies was Labour MP for Merthyr Tydfil from 1934 to 1970. He was first elected in a by-election following the death of the local ILP MP with 51% of the vote (against the Liberal, ILP candidate and Communist) and 68% in the 1935 general election against the ILP only. But for the rest of his career, he received support from percentages ranging between 74% and 81%. The Plaid candidates who opposed him in the 50s and 60s were Trevor Morgan (as an independent nationalist), Ioan Bowen Rees and Meic Stephens.

But before the 1970 election a reporter with the Merthyr Express had a look at a list of potential Labour candidates throughout England, Wales and Scotland. The name of S.O. Davies was there, with the * symbol next to him. The correspondent asked the printers what its significance was and got the answer that it meant ‘not re-adopted’ as the local party was in the process of selecting SO’s successor, although there was no discussion between them and him about the decision. The Merthyr Express announced this shocking news of the release of one who had served his people as a local councilor, mayor and Member of Parliament for tens of years. 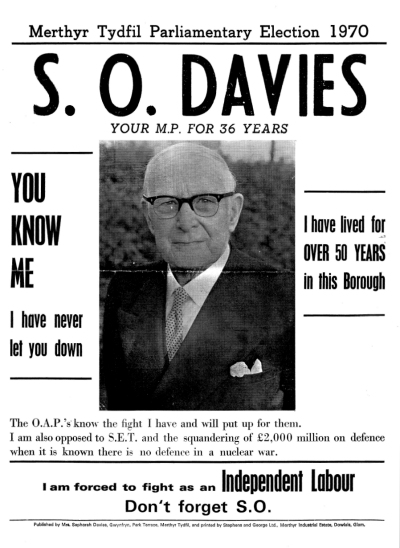 The rest is a myth. S.O. as an ‘Independent Labour’ candidate (which would not be legally possible today), winning 51% of the vote against the official Labour Tal Lloyd (another former mayor). By a strange coincidence, these are the exact percentages (rounded) that S.O. and his liberal opponent received in the 1935 by-election. Plaid Cymru’s annual conference was held at Cyfarthfa Castle in 1958 and Tal Lloyd, in his capacity as the mayor, officially welcomed the members to the borough.

Chris Rees was Plaid Cymru’s candidate in 1970. He once told me that he did not only congratulate S.O. but added that it was the first time he could say how proud he was that he hadn’t won himself! And I know of at least one member of the Party who helped S.O. in his campaign.

S.O. Davies was a patriot. In the Wikipedia entry about him it is said: Largely indifferent to party discipline, he defied official Labour policy by championing such causes as disarmament and Welsh nationalism.  He supported the Parliamentary petition for Wales movement in the 1950s, joining the speakers on stage at a rally organized by Plaid Cymru in Cardiff in September 1953 (see photo on page 297 of Tros Cymru, JE and Plaid by JE Jones, 1970). And in 1955 he introduced his ‘Government of Wales’ measure in the House of Commons, which was prepared with the help of party experts. But as expected, his attempt was unsuccessful.

Here is one interesting part of the debate on the floor of the House. S.O. said that support for the measure comes from ‘Monmouthshire, Cardiff, West —‘. George Thomas (MP for Cardiff West) interrupted him saying: ‘The hon. Gentleman won’t get much support there ‘. S.O. finished his sentence masterfully: ‘— Rhondda, and other places’.

S.O. Davies died in 1972, and the by-election was won for Labour by Ted Rowlands with 48.5% of the vote, the Plaid Cymru candidate Emrys Roberts gained 37%. 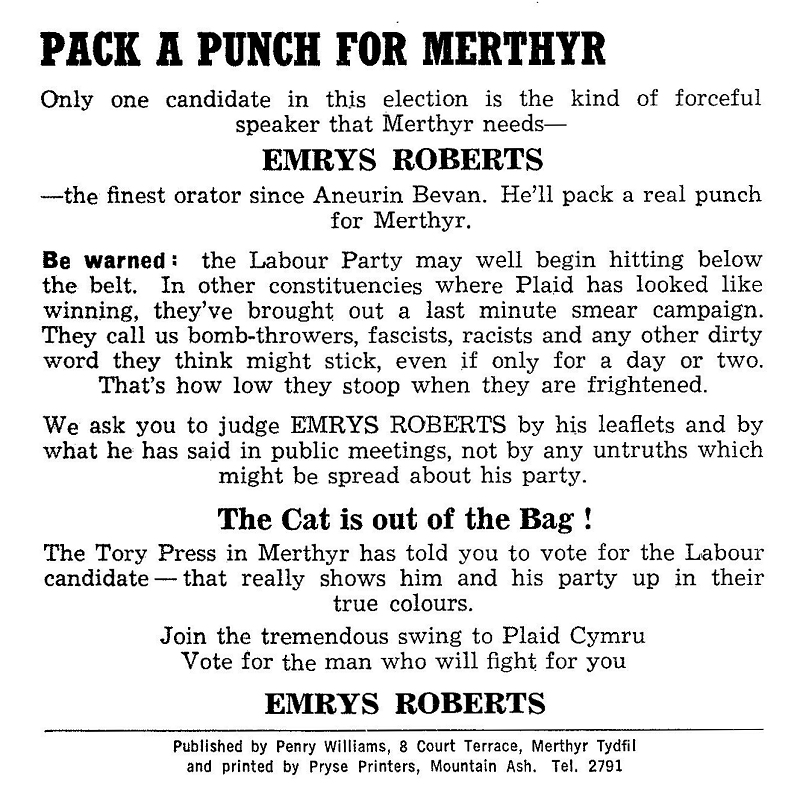 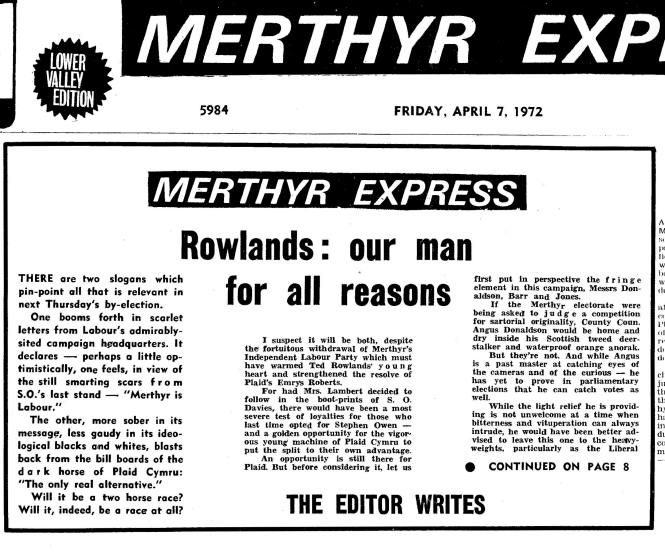