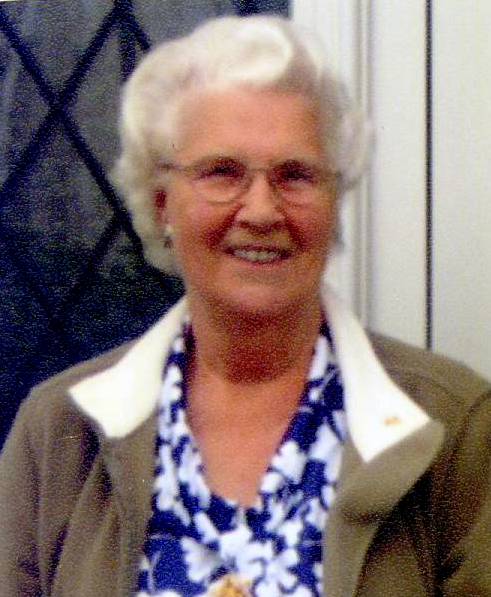 Ivy was a character.  That was the opinion of all who had met her and all who had the privilege of calling her a friend..

She was a many faceted character, the backbone of her family throughout her life, a livewire  in her community, busy within church and chapel, a world traveller, a language and history  student and one who took interest in public affairs at every opportunity.  She was honest and plain speaking  with everyone – no matter who they were, or what their circumstances were.  To crown it all she had a sharp and dry sense of humour  that hit the right note and set things exactly in their right perspective.

Ivy was born I Godreaman in September 1921.  She was an intelligent person, but like many of her contemporaries  – in spite of their abilities  did not have the opportunity to continue with her education.  She had to leave school at the earliest opportunity to help  support the home.  It was ironically, the massacre of the Second World War that gave women the opportunity   to widen their horizons and their experiences by going to work for the first time in factories, shops or offices as part of the war effort and and  Ivy played her part .

After the war Ivy and her husband Tom married in St. Margarets church, Aberaman and settled in York street where they brought up their family.  Tom was also a very likable person.  He worked as a carpenter in the Aberaman pit for years but his heart was in the country .  He was very aware of his family background in the Senny Valley. Horses ,shearing and harvest times  were his delight  but  like many other rural families of that time left for industrial Glamorgan..

Ivy and Tom had two children, Pat and Steve.  Pat now lives in Whitchurch, Cardiff where she partakes in the Welsh life of the city.  Steve lives outside Canberra in Australia and worked as a craft and technology teacher.

Ivy and Tom were good Welsh people and had some knowledge of the language.  When Pat and her late husband Graham decided to bring up their children to be fluent Welsh speakers, Ivy with her characteristic application and determination decided to improve her Welsh in order to be part of the family’s intention.  I had the pleasure of being her tutor at the old Aman School during the 80’s and  because of the determined way in which she applied herself to the task she soon became quite fluent and ready to speak in Welsh.  There was very little English between us from then on.  When Clochdar was established in 1987 Ivy was one of its most loyal readers and supporter.

Ivy and Tom gave generously of their time during the 80’s and 90’s helping  Plaid in Godreaman during every election.  At the time I worked as an election agent for Plaid and often there were many problems when organising  campaigns, but there was never any cause to worry about the polling station in Ysgol Aman with the Thomas family in charge.

Ivy became a member of Capel Gwawr, Jubilee Rd. and worked assiduously there for many a year.  Sometime after Tom’s death in 2000 it was decided that she should move to Cardiff to be closer to Pat and her grandchildren.  In no time at all she discovered Ty’r Cymry where Welsh learners meet, and  for as long as she was able to she was a loyal member.  She also made several  journeys to Australia to visit Steve and his family.

Cardiff gave Ivy a second lease of life.  She enjoyed travelling independently on the Cardiff  buses.  She joined Pat in the life of the Welsh Unitarian church in Cardiff and in Highland Place Aberdare and it seemed as if she had found a new spiritual home inkeeping with her nature.  She made many new friends in her new home and looked forward in a confident and practical way towards the future, but  she did not forget Clochdar and looked forward to receiving  and read her monthly copy.

Ivy’s children  and grandchildren were of the utmost importance to her  and brought her unending pleasure . What gave her boundless joy was to be able on th 3rd September to celebrate her 90th birthday, still in good health in their company.

Following a short illness Ivy died on 27th April in her daughter’s home.  The funeral was conducted by  The Reverend Eric Jones in Thornhill Llanishen on the 8th of May.  It was a blessing for Ivy and the family that Steve had been able to come home in good time (as he and his family had been able to do for his mother’s 90th birthday the previous  September.

The service in Thornhil on that summery dayl was a celebration of Ivy’s life, an occasion to raise the spirit – as Ivy did so often during her lifetime.  Though writing these words in her memory I cannot get rid of the feeling that I have lost not only an old friend but also a friend who became old.