It was my privilege at Conference last month to present a posthumous long service award to the family of the late Jim Criddle, longstanding Plaid activist and councillor from Pontllanfraith. 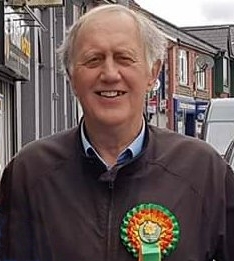 I’m told that Jim was at one time a Labour Party member, but it didn’t take him long to see the light. He was convinced by his old friend Malcolm Parker to stand for Plaid in a local council election in the early 70’s, and so began a lifetime of commitment to Plaid and a total of over 30 years’ service as a councillor.

At the same time Jim set out to learn Welsh, which he did. Through these studies he met his wife, Rhian Heulyn, and the two raised a Welsh speaking family, Betsan, Geraint and Branwen. Working for Plaid became a family project. The children remember Jim’s golden rules for leafleting, including always leave the gate as you find it, don’t annoy the dogs and NEVER EVER climb over walls between gardens – no matter how many steps you have to go up and down!

Wherever work for Plaid was needed, there you would find Jim – leafleting, canvassing, running the branch, working for the Credit Union – it wasn’t the task that mattered to Jim, it was the cause.

As well as his work for Plaid and as a councillor, his teaching job and his family commitments, Jim, with Rhian, was a passionate campaigner for Welsh medium education in Gwent. It was quite a struggle, but they won. I’ll never forget how proud Jim was when Ysgol Gyfun Gwynlliw opened.

Jim loved his family, he loved his community, and he loved Wales. He worked quietly for the causes he believed in. He died too soon. His family, friends and colleagues will always remember this gentle giant. Wales needs more Jim Criddles.