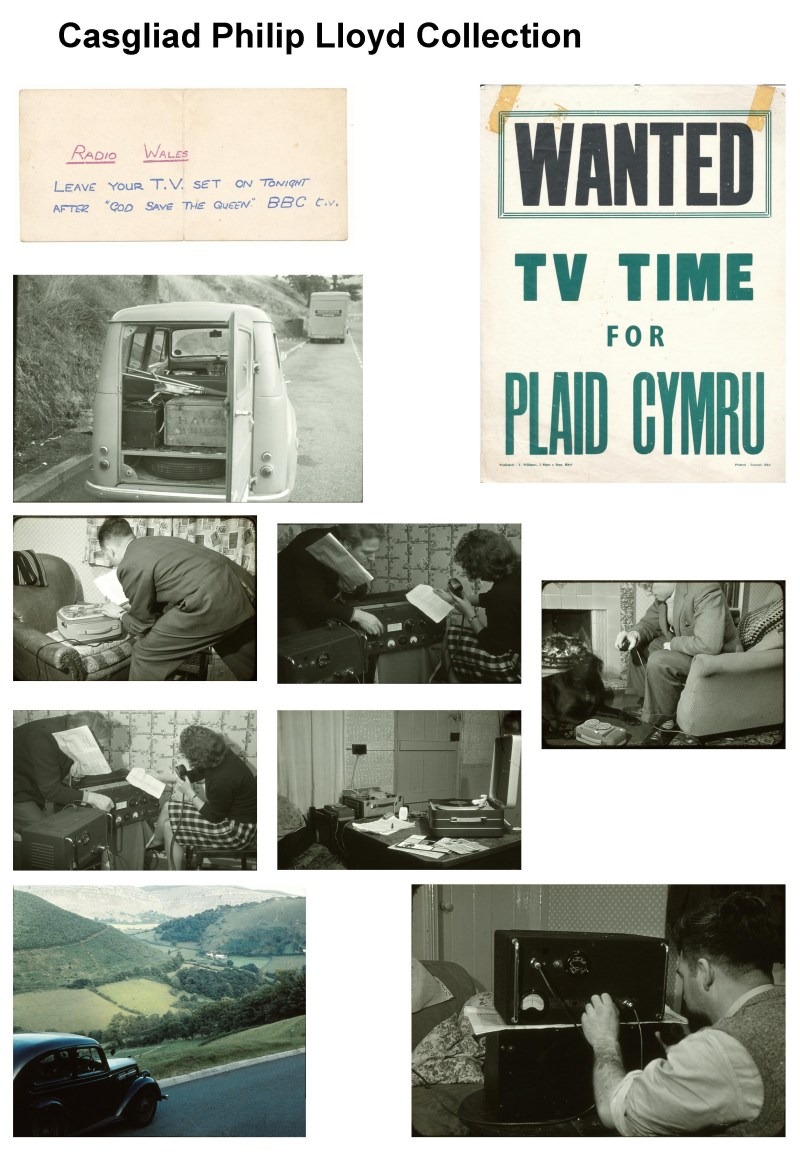 (to be read in conjunction with my sound-tape and photographs)

We are accustomed to having Plaid Cymru’s views and policies aired in the press and on radio and television these days. But things were quite different fifty years ago. Radio broadcasts by the political parties were allocated on a UK-wide basis only, according to the number of seats contested during the previous election. All parties who had put up candidates in at least 50 constituencies (i.e. about one-twelfth of the total) were granted air-time. But even if Plaid Cymru were to fight all the then 36 Welsh seats, we would not qualify.

Under the chairmanship of Lord Macdonald of Gwaunysgor, former Labour MP and last Governor of Newfoundland, the Welsh Broadcasting Council, set up by the BBC’s 1952 charter, was given control of programmes on the Welsh Home Service (a similar situation obtained in Scotland). So it was gratifying to learn that, mindful of their duty to give ‘full regard to the distinctive culture, interests and tastes’ of the people they served, Lord Macdonald & Co decided to apply the same one-twelfth rule to Wales, and proposed two 15-minute radio broadcasts per annum (in Welsh or English as desired) on Welsh Home Service to all parties who had contested at least three out of the 36 constituencies in Wales. Plaid Cymru would have been well-qualified, having fielded eleven candidates in 1955 and gaining over 45,000 votes.

So far, so good. But things did not go quite to plan, as Gwynfor Evans related in his persuasive pamphlet The Wicked Ban and the SNP in their analytical Broadcasting in Scotland, an Examination of B.B.C. Policies. The Welsh Broadcasting Council duly called a meeting of all four qualifying parties – Labour, Conservative, Liberal and Plaid Cymru – to discuss their proposals. However, a letter from the BBC’s Welsh headquarters, dated 20 January 1955 cancelled the follow-up meeting scheduled for eight days later. Gwynfor refers to two meetings calculated to bring pressure to bear on the Broadcasting Council: one in February attended by Labour and Tory bigwigs and one in April with Postmaster General Dr Charles Hill. In the ensuing press conference Lord Macdonald announced that if he and his colleagues persisted with their plan, the good doctor would issue a directive preventing them.

Did the Welsh Broadcasting Council yield to pressure? Oh no, they didn’t! So, on 27 July, Hill wrote two letters to the Rt Hon Sir Alexander George Montagu Cadogan, OM, GCMG, KCB, PC, Chairman of the BBC Board of Governors. The lengthy one explained why HM Government and Official Opposition agreed that giving ‘full regard to the distinctive culture, interests and tastes …’ could not apply to what he called ‘regional’ party political broadcasts. The second, terse, missive required the Corporation to ‘refrain at all times from sending … any controversial party political broadcast on behalf of any political party, other than any series … arranged by the Corporation in agreement with the leading political parties for broadcasting throughout the United Kingdom’. Coincidentally, it is sad to note that when appointed Chairman of the Board of Governors, this distinguished former diplomat and senior civil servant had expressed his concern to Winston Churchill that he lacked appropriate qualifications, and that the response he received was ‘There are no qualifications. All you have to do is to be fair’.

‘This is the first time’, concluded Lord Macdonald, ‘a Postmaster General has exercised his right of veto, and we regret that he should have found it necessary to do it against Wales’. The Western Mail said: ‘If they [the Labour and Conservative Parties] are content, as British parties, to broadcast on a British scale only, then they could well allow a specifically Welsh party to broadcast on a Welsh scale. The first duty of the majority is to assure the rights of the minority – however wrong-headed that minority may appear to be’. Conversely, when I questioned Caerffili MP Ness Edwards in a Labour Party public meeting at Deri, near Bargoed some time later, he reiterated his opinion that BBC [clearly meaning Lord Macdonald and the Welsh Broadcasting Council] regarded Plaid Cymru as its ‘favourite child’. Diplomatically, I made no comment!

During the next few years, various groups of Plaid members started to take to the airwaves in an unofficial and illegal campaign to overcome this Labour-Tory collusion. Fearing possible eavesdropping on clandestine planning by telephone, some Welsh-speaking participants would use the cryptic message ‘Mae’r ceiliog yn canu heno’ [the cockerel is crowing tonight’]. One name frequently mentioned was university mathematics lecturer Dr Gareth Evans, who was generous with his advice about obtaining equipment via cheap sources such as the Exchange & Mart weekly. He was to stand as the party’s Ceredigion candidate in 1959 and again in 1964. Plaid’s 1959 conference was held in Llangefni, where talk about illegal broadcasting was rife. That was when I received my initiation into its operation. I was asked by none other than General Secretary J.E. Jones to take two gentlemen of the press to a local broadcast at the dead of night. In the words of Cymro newspaper reporter Dyfed Evans, they were carried in a [pre-war] Standard 9 ‘a swniai yn y tywyllwch fel pe bai’n prysur datgymalu’ [which sounded in the darkness as if it was rapidly disintegrating’]. His report and the picture of the transmission taken by celebrated photographer Geoff Charles are reproduced on page 278 of Tegwyn Jones’s massive Llyfr y Ganrif [Book of the Century].

The photographs bring back fond memories of an enthusiastic Rhymney Valley fraternity born out of a sense of injustice perpetuated by those who should have known better. From the top, left to right, they show:-

Yours truly editing sound-tapes in my Troedyrhiw ‘studio’.  By then I was teaching at Ysgol Glan Clwyd, Rhyl (the first Welsh-medium secondary school) and returning home to my parents’ home during school holidays

From the Ebbw Vale by-election. The late Glyn James tries to shield his face during a broadcast

Dave Pritchard. On the floor: his portable battery-operated tape-recorder, on which he had recorded the speeches delivered by Emrys Roberts and Labour’s Michael Foot in a public meeting. Here he is re-recording extracts for transmission by holding the microphone of a larger machine above his portable one. No wonder the sound quality leaves much to be desired at times!

Glyn James again, this time succeeding in shielding his face. I cannot take all the credit for these two photographs. A local party member was there in his professional capacity as a journalist. He instructed me to set my camera at a long exposure while he set off his high-power instantaneous flash. The result: two well-illuminated photographs. I regret, however, that I cannot remember his name

My Troedyrhiw ‘studio’ again: record-player and male-voice choir record for use during the mid-programme interval, script and large tape-recorder on the table

My Standard 9 (of Cymro fame) in the dramatic scenery of the Horseshoe Pass, near Llangollen

Deri Smith transmitting. We would use the television wavelength, but wait patiently until the obligatory God Save the Queen had finished at the end of the day’s programmes 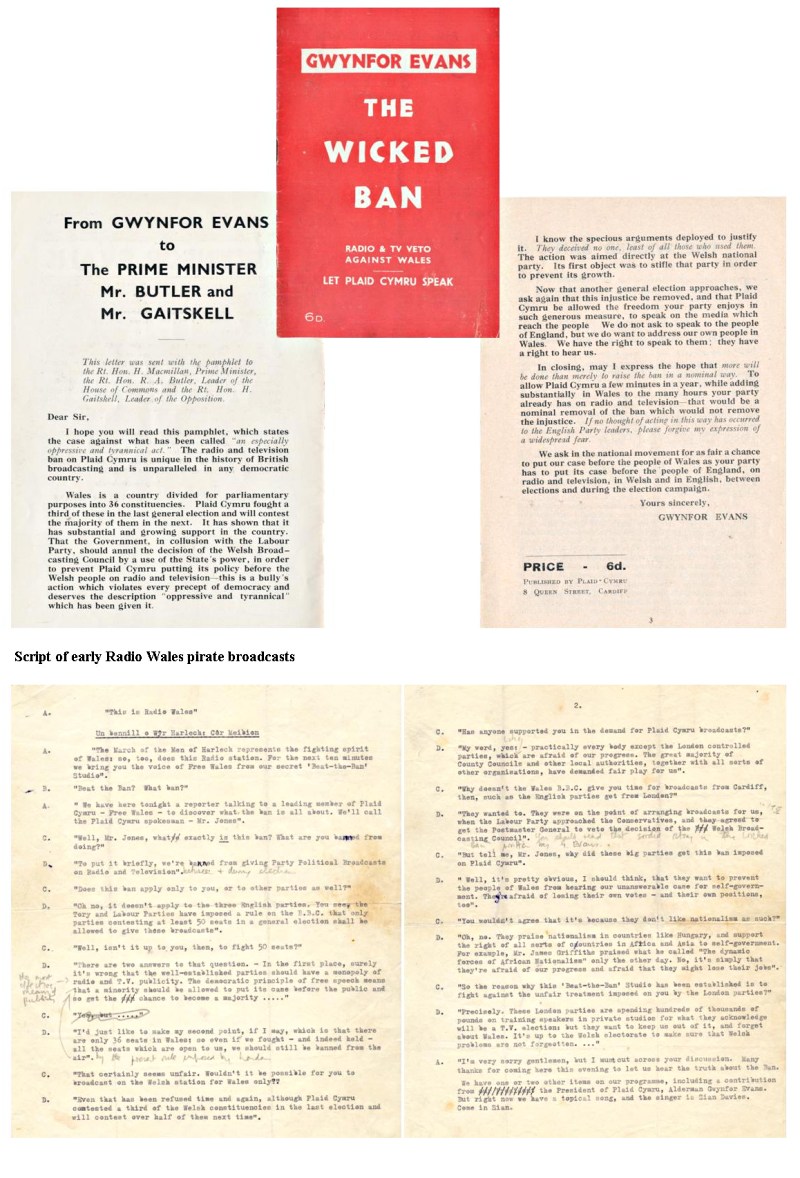 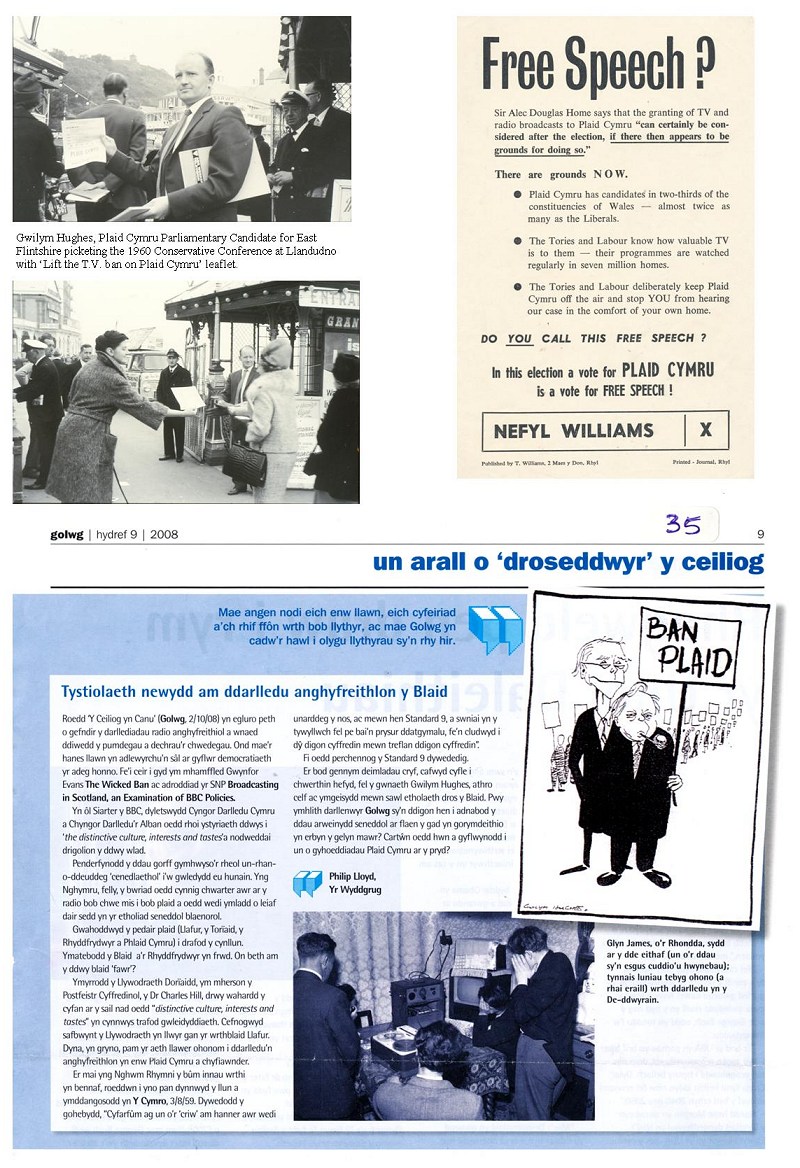 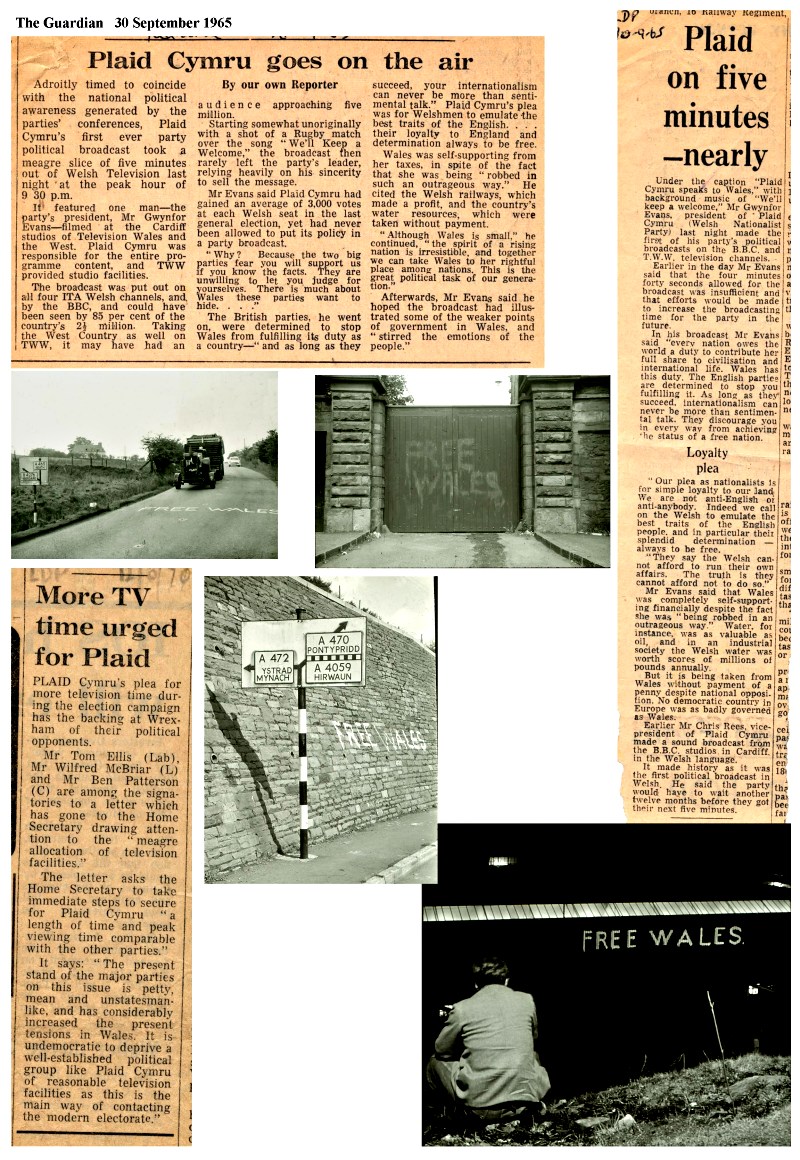 I write elsewhere about my Rhymney Valley ‘Radio Wales’ broadcasting colleagues of the early 1960s. One diversion of theirs was to roam their home area (and slightly farther afield) with paint-pot and brush. They were so proud of their handiwork that they insisted on taking me to see it. These photographs are a record of my tour:-

A colliery halt near Bedlinog at night. I am particularly proud of this effort, with an exposure lasting for scores of seconds

At the former Fidler’s Elbow road junction, near the point where the old Merthyr / Cardiff road aproaches the modern dual-carriageway A470

The main gates of Brecon Barracks, after they had been cleaned. How did they do it?

The road between Fidler’s Elbow and Nelson 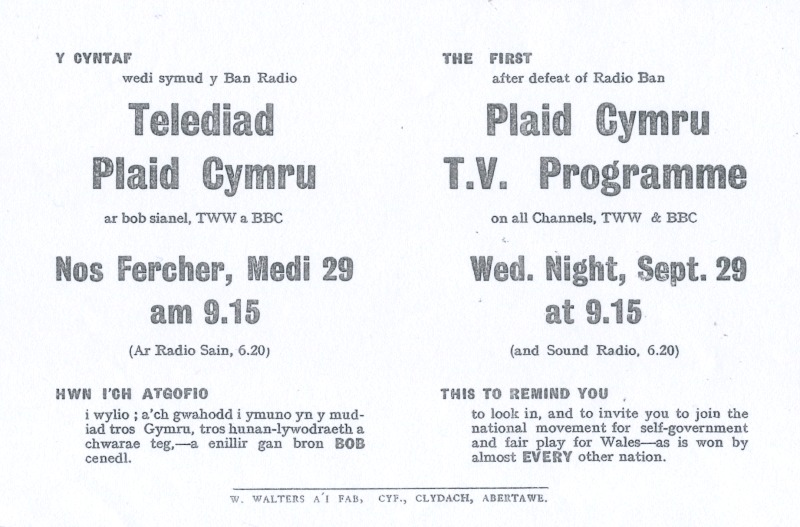