Among the many people from Wales who travelled north to help the campaign for Scottish independence were Gwerfyl Hughes Jones, Llanuwchllyn and Mari Evans and Dafydd Williams from Swansea.  This is an unofficial record of their referendum week.

‘Pob lwc’ – all the best was the encouraging farewell as we left Bala for Scotland a few days before the independence referendum, the first time for a century for one of the Celtic nations to challenge the might of the British state.

We had heard that Dumfries and the border areas were lukewarm, so crossing the Scots border gave a boost.  There were at least as many Yes as No posters along the road, and it seemed that the temperature increased the further north we travelled towards the small town of Balerno on the outskirts of Edinburgh, the home of our friend Morag Dunbar, who is well acquainted with Wales. 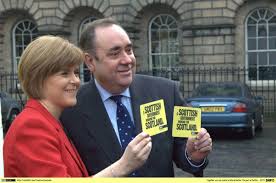 We reported for duty at the office of Gordon MacDonald, SNP member of the Scottish parliament.  This was the Yes Scotland headquarters for the Edinburgh Pentlands constituency.  The organisation was truly impressive, with plenty of work ready and waiting for the dozens of volunteers who were turning up but time for a warm welcome from Gordon and his fellow workers for the Welsh contingent.  It was reminiscent of the atmosphere of the Caerffili by-election back in the 1960s – and there was something similar taking place the length and breadth of Scotland.

Before long we were out distributing Yes campaign literature in Saughton, a working class area of Edinburgh – a folded mini-leaflet summing up the key massages of the campaign together with a striking red poster urging a Yes vote to end Tory rule for ever!  And the impression we got was that people were listening to the message and talking about it – in an area that would have been counted as a Labour stronghold until just a few years ago.

Time for a quick lunch in the local Sainsbury where the young man behind the counter was pleased to see our campaign badges – he and his friends were backing the Yes campaign, he said.  Then back to a neighbouring area, Stenhouse, and coping with several tenements where we needed to persuade one of the local residents to open the door for us to spread the good news!

In the evening we boarded the 44 bus to the centre of Edinburgh to meet Neasa, a young woman from County Kerry in the West of Ireland in the Cafe Royale, which despite its name is a celebrated tavern rightly proud of its traditional ale.  And plenty of discussion about the referendum there too – at the bar I bumped into Donny who had met other Welsh volunteers, including one group who had camped, the grandchildren of Gwynfor Evans among them. 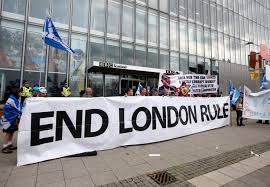 Of course not everyone’s supportive.  Campaigning in the Broomhouse area we met a 92-year-old lady who was voting ‘Nae!’, her flat plastered with No campaign posters.  Despite that, in Broomhouse too there was plenty of evidence of the Yes campaign.  Not so the Press.  The day before the referendum vote the tabloid papers were viciously against, with no attempt to give space to both sides.  Their open bias reflected the real nature of the contest, with the Establishment playing every trick in the book to prevent  Scotland from moving ahead – the press barons joining up with the Westminster elite, the bankers and some bus business chiefs to create fear.

In the afternoon Colin took us over to the Oxgang Road to offer last minute stickers to traffic held up by road works – not the most enjoyable way of spreading the word.  You could readily sense the difference in response between people in more expensive cars and others; those in the top of the range vehicles, with some exceptions, refusing abruptly, while ordinary more ready to accept the blue Yes stickers.  But there was no mistaking the strong support for independence among the young people walking home from school, some of them over 16 years of age and preparing to vote the next day.  Perhaps that was the big story of the referendum – the fearful opposition of the elderly versus the enthusiastic support of the young for a better future.  One poll on referendum day found discovered that a majority of people under 55 had voted Yes. 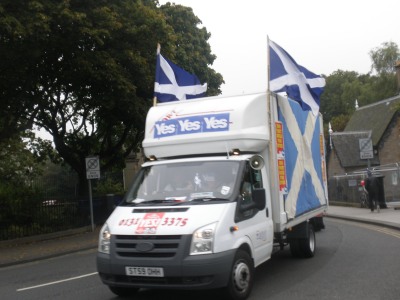 The day of destiny dawned.  We were already equipped with a substantial quota of reminder cards and away we went to the Wester Hailes to take them from door to door.  An area to be compared with Ely in Cardiff, said some, but the streets in our patch were pleasant and well maintained.  Children had a day off school of course, and we met a young girl and her brother who were holding their own opinion poll on how people were voting, by studying the window posters on display and asking passers-by how they were voting – their score was 22-1 for Yes (but that did include three from Wales!)

As we neared the end of our quota, who should appear round the corner but two familiar faces, Lis and Emyr Puw from Llanuwchllyn, despatched on the same mission!  That set us thinking how many people  from Wales had travelled to work for independence for Scotland, scores if not hundreds for sure, helping to cancel out the negative voices of Welsh Labour politicians.

Then it was down to the centre of Edinburgh to experience some of the thrill of this unique campaign.  We found a place to park in the elegant Charlotte Square, where as well as Yes posters some large Union Jacks demonstrated the opposition of a substantial number of those in the financial and professional sectors to independence for their country.  But outside Scotland’s striking Parliament the Yes campaign was everywhere, a colourful crowd of blue posters and Saltire flags with a number of loudspeaker vans raising the temperature.  In the quiet of the Parliament chamber itself, we talked with a young man originally from Birchgrove, Swansea who now works in the oil industry; he told us of a friend who went to his polling station intending to vote No but ended up voting Yes.

That evening on the Royal Mile, we met a number of young people from Catalunya and the Basque Country, dedicating holiday time to take part in a historic event, their singing and dancing adding to the atmosphere and the feeling that something truly great was about to happen.  Then we got involved in an exchange of views with a Better Together outside a polling station – given their support for Trident missiles, consensus was never really on the cards!

Then it was back to Balerno to watch the result.  For the first time, I had begun to hope that the Yes campaign could win against all the odds, however much the head told the heart that a Yes vote was a big ask.  So it was a disappointment to see the first council to declare, Clackmannan, going to the No side and the hope for independence fade.  I grabbed some sleep before coming back to see the Fife area confirming that Scotland would have to wait before joining the world.  It was sad to walk the streets of Edinburgh down towards the Holyrood Parliament once again, the drizzly weather reflecting our feelings.  We bumped into Richard Wyn Jones on the Royal Mile, his analysis as incisive as ever.  There were a number of Red Dragon flags among the crowd outside the parliament building although things were quieter than the day before.  On our way back came another blow as we heard by text of the resignation of the SNP leader Alex Salmond, a hero to many throughout  the Celtic nations.

But on our way back to Wales that evening, we still felt the excitement of being in a truly historic battle for the soul of our sister nation.  With the younger generation in favour, I have no doubt that Scotland will continue its journey to independence.  We didn’t win this battle, not quite, but the dream lives on.