Stephen Griffith was born in BIaenau Ffestiniog, a slate-producing area of North Wales in 1908, and died at home, cared for by his family, on 12th December, 2010 in Neyland at the age of 102. 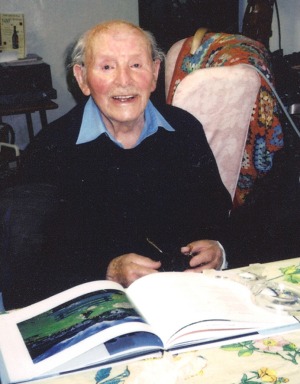 He went to Bangor University, where he read Physics, and was awarded an MSc. in 1958 for his statistical work and analysis of reasons for failure in Grammar School. He spent his career as a Physics teacher in Hereford. Buckinghamshire and, from 1949, in Pembrokeshire. In 1942 he married Clemency, and 3 daughters were born to them, Dilys, Margaret and Enid. As a conscientious objector and enthusiastic pacifist, he drove an ambulance during the Second World War, and after the war he and Clemency became Quakers. He then became a member of Plaid Cymru, and as a close friend of his fellow Quaker, Waldo Williams, he backed Waldo’s campaign in the 1950’s as Pembrokeshire’s first Plaid Cymru candidate.

During his days at Pembroke Grammar School, he, and Islwyn Griffiths, a great friend and colleague, with the help of others, ran an International Camp for overseas students and others who were studying in Britain, for a fortnight every summer for 15 years in succession. They were eager to foster understanding and good relations between the countries represented. After his school days in Pembroke, he went as a volunteer to teach physics in a school in Ghana to make his contribution to the third world. After that he taught Science, Maths and Welsh locally.

The decade that followed was his most fruitful as regards literary output. He was the author of 7 books, 5 of them in Welsh. He was an enthusiastic Eisteddfod goer, and in recognition of his contribution to the literary life of Wales, he was privileged to be admitted in white robes to the Gorsedd Circle in Rhyl in 1985.

Among his many interests were bee keeping, enjoying the Cleddau Waterway in his little boat, watching travel programmes on television, taking interest in his tiny pond with its frogs, water lilies, and solar fountain, reading Welsh books and battling the gremlins in his computer! He was very keen on the environment and had solar panels installed on the roof of his bungalow in Neyland. In his latter years he used to be seen from time to time on his scooter for the disabled. As long as he was able to, he took a great interest in life and issues of the day.

His funeral took place at Parc Gwyn on 17th December 2010 and a Memorial Meeting to give thanks for the grace of God in the life of Stephen Griffith was held in the Quaker Meeting House, Priory Road, Milford Haven on Saturday, 29th Jan., 2011 at 2pm.